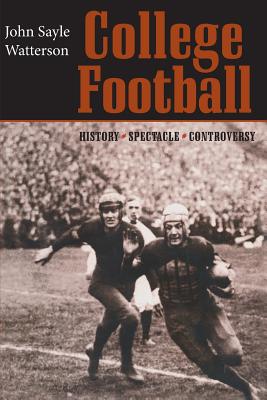 The rules of the game have changed in the past hundred years, but human nature has not.

In March 1892] Stanford and California had played the first college football game on the Pacific Coast in San Francisco . . . The pregame activities included a noisy parade down streets bedecked with school colors. Tickets sold so fast that the Stanford student manager, future president Herbert Hoover, and his California counterpart, could not keep count of the gold and silver coins. When they finally totaled up the proceeds, they found that the revenues amounted to $30,000--a fair haul for a game that had to be temporarily postponed because no one had thought to bring a ball --from College Football: History, Spectacle, Controversy, Chapter Three

In this comprehensive history of America's popular pastime, John Sayle Watterson shows how college football in more than one hundred years has evolved from a simple game played by college students into a lucrative, semiprofessional enterprise. With a historian's grasp of the context and a novelist's eye for the telling detail, Watterson presents a compelling portrait rich in anecdotes, colorful personalities, and troubling patterns.

He tells how the infamous Yale-Princeton fiasco of 1881, in which Yale forced a 0-0 tie in a championship game by retaining possession of the ball for the entire game, eventually led to the first-down rule that would begin to transform Americanized rugby into American football. He describes the kicks and punches, gouged eyes, broken collarbones, and flagrant rule violations that nearly led to the sport's demise (including such excesses as a Yale player who wore a uniform soaked in blood from a slaughterhouse). And he explains the reforms of 1910, which gave official approval to a radical new tactic traditionalists were sure would doom the game as they knew it--the forward pass.

As college football grew in the booming economy of the 1920s, Watterson explains, the flow of cash added fuel to an already explosive mix. Coaches like Knute Rockne became celebrities in their own right, with highly paid speaking engagements and product endorsements. At the same time, the emergence of the first professional teams led to inevitable scandals involving recruitment and subsidies for student-athletes. Revelations of illicit aid to athletes in the 1930s led to failed attempts at reform by the fledgling NCAA in the postwar Sanity Code, intended to control abuses by permitting limited subsidies to college players but which actually paved the way for the free ride many players receive today.

Watterson also explains how the growth of TV revenue led to college football programs' unprecedented prosperity, just as the rise of professional football seemed to relegate college teams to minor league status. He explores issues of gender and race, from the shocked reactions of spectators to the first female cheerleaders in the 1930s to their successful exploitation by Roone Arledge three decades later. He describes the role of African-American players, from the days when Southern schools demanded all-white teams (and Northern schools meekly complied); through the black armbands and protests of the 60s; to one of the game's few successful, if limited, reforms, as black athletes dominate the playing field while often being shortchanged in the classroom.

Today, Watterson observes, colleges' insatiable hunger for revenues has led to an abuse-filled game nearly indistinguishable from the professional model of the NFL. After examining the standard solutions for reform, he offers proposals of his own, including greater involvement by faculty, trustees, and college presidents. Ultimately, however, Watterson concludes that the history of college football is one in which the rules of the game have changed, but those of human nature have not.

John Sayle Watterson is the author of Thomas Burke: Restless Revolutionary and The Games Presidents Play: Sports and the Presidency.
Loading...
or support indie stores by buying on