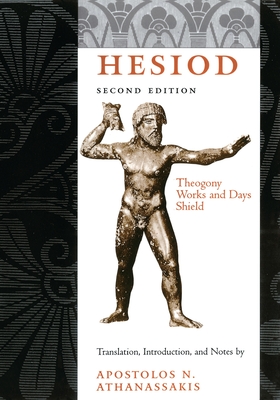 Hesiod belongs to the transitional period in Greek civilization between the oral tradition and the introduction of a written alphabet. His two major surviving works, the Theogony and the Works and Days, address the divine and the mundane, respectively. The Theogony traces the origins of the Greek gods and recounts the events surrounding the crowning of Zeus as their king. A manual of moral instruction in verse, the Works and Days was addressed to farmers and peasants.

Introducing his celebrated translations of these two poems and of the Shield, a very ancient poem of disputed authorship, Apostolos Athanassakis positions Hesiod simultaneously as a philosopher-poet, a bard with deep roots in the culture of his native Boeotia, and the heir to a long tradition of Hellenic poetry. For this eagerly anticipated revised edition, Athanassakis has provided an expanded introduction on Hesiod and his work, subtly amended his faithful translations, significantly augmented the notes and index, and updated the bibliography. Already a classic, Hesiod: Theogony, Works and Days, Shield is now more valuable than ever for students of Greek mythology and literature.

Apostolos N. Athanassakis holds the James and Sarah Argyropoulos Chair in Hellenic Studies at the University of California, Santa Barbara. Among his many translations is The Homeric Hymns, now in its 3rd edition, also available from Johns Hopkins University Press.
or
Not Currently Available for Direct Purchase