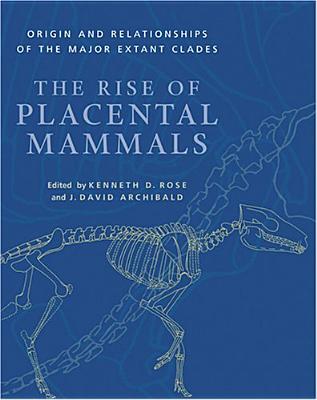 The Rise of Placental Mammals

Origins and Relationships of the Major Extant Clades

From shrews to blue whales, placental mammals are among the most diverse and successful vertebrates on the Earth. Arising sometime near the Late Cretaceous, this broad clade of mammals contains more than 1,000 genera and approximately 4,400 extant species. Although much studied, the origin and diversification of the placentals continue to be a source of debate.

Paleontologists Kenneth D. Rose and J. David Archibald have assembled the world's leading authorities to provide a comprehensive and up-to-date evolutionary history of placental mammals. Focusing on anatomical evidence, the contributors present an unbiased scientific account of the initial radiation and ordinal relationships of placental mammals, representing both the consensus and significant minority viewpoints. This book will be invaluable to paleontologists, evolutionary biologists, mammalogists, and students.

Kenneth D. Rose is a professor at the Center for Functional Anatomy and Evolution at the Johns Hopkins University School of Medicine and a research associate at the Smithsonian National Museum of Natural History in Washington, D.C., and the Carnegie Museum of Natural History in Pittsburgh. J. David Archibald is Professor of Biology and Curator of Mammals in the Department of Biology at San Diego State University. In addition he is a Research Associate at the San Diego Museum of Natural History and the University of California Museum of Paleontology, Berkeley. For the past 10 years he has directed the URBAC Paleontological Expeditions to the Kyzylkum Desert, Uzbekistan, where he and his colleagues search for early placental mammals.
Loading...
or
Not Currently Available for Direct Purchase