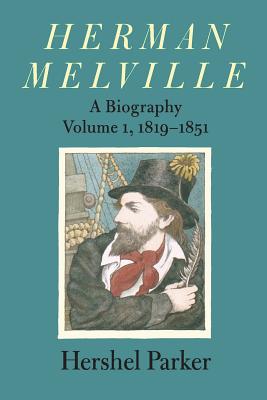 From the Associate General Editor of The Writings of Herman Melville, the first of a two-volume project constituting the fullest biography of Melville ever published.

Having left most of Moby-Dick with a printer in 1851, Herman Melville lamented to Nathaniel Hawthorne that he would go down in history as a man who lived among the cannibals Until his death in 1891, Melville was known as the author of Typee (1846) and Omoo (1847)--both semiautobiographical travel books, and literary sensations because of Melville's sensual description of the South Sea islanders. (A transatlantic furor raged over whether the books were fact or fiction.) His most famous character was Fayaway--not Captain Ahab, not the White Whale, not Bartleby, and definitely not Billy Budd, whose story remained unpublished until 1924.

Herman Melville, 1819-1851 is the first of a two-volume project constituting the fullest biography of Melville ever published. Hershel Parker, co-editor of the Northwestern-Newberry Edition of The Writings of Herman Melville, reveals with extraordinary precision the twisted turmoil of Melville's life, beginning with his Manhattan boyhood where, surrounded by tokens of heroic ancestors, he witnessed his father's dissipation of two family fortunes. Having attended the best Manhattan boys' schools, Herman was withdrawn from classes at the Albany Academy at age 12, shortly after his father's death. Outwardly docile, inwardly rebellious, he worked where his family put him--in a bank, in his brother's fur store--until, at age 21, he escaped his responsibilities to his impoverished mother and his six siblings and sailed to the Pacific as a whaleman.

A year and a half after his return, Melville was a famous author, thanks to the efforts of his older brother in finding publishers. Three years later he was married, the man of the family, a New Yorker--and still not equipped to do the responsible thing: write more books in the vein that had proven so popular. After the disappointing failure of Mardi, which he had hoped would prove him a literary genius, Melville wrote two more saleable books in four months--Redburn and White-Jacket. Early in 1850 he began work on Moby-Dick. Moving to a farmhouse in the Berkshires, he finished the book with majestic companions--Hawthorne a few miles to the south, and Mount Greylock looming to the north. Before he completed the book he made the most reckless gamble of his life, borrowing left and right (like his wastrel patrician father), sure that a book so great would outsell even Typee.

Melville lovers have known Hershel Parker as a newsbringer--from the shocking false report headlined Herman Melville Crazy to the tantalizing title of Melville's lost novel, The Isle of the Cross. Carrying on the late Jay Leyda's The Melville Log, Parker in the last decade has transcribed thousands of new documents into what will be published as the multi-volume Leyda-Parker The New Melville Log. Now, exploring the psychological narrative implicit in that mass of documents, Parker recreates episode after episode that will prove stunningly new, even to Melvilleans.

Hershel Parker, H. Fletcher Brown Professor Emeritus at the University of Delaware, is co-editor with Harrison Hayford of the landmark Norton Critical Edition of Moby-Dick (1967 and 2001) and Associate General Editor of The Writings of Herman Melville. His previous publications include Flawed Texts and Verbal Icons and Reading Billy Budd. He is also editor of an edition of Melville's Pierre (1995), illustrated by Maurice Sendak.
Loading...
or support indie stores by buying on