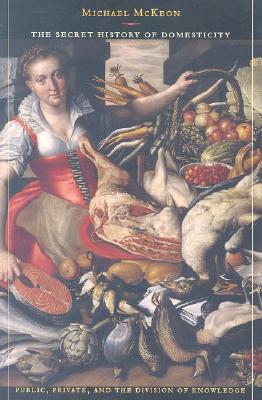 The Secret History of Domesticity

Public, Private, and the Division of Knowledge (Director's Circle Book)

Taking English culture as its representative sample, The Secret History of Domesticity asks how the modern notion of the public-private relation emerged in the seventeenth and eighteenth centuries. Treating that relation as a crucial instance of the modern division of knowledge, Michael McKeon narrates its pre-history along with that of its essential component, domesticity.

This narrative draws upon the entire spectrum of English people's experience. At the most "public" extreme are political developments like the formation of civil society over against the state, the rise of contractual thinking, and the devolution of absolutism from monarch to individual subject. The middle range of experience takes in the influence of Protestant and scientific thought, the printed publication of the private, the conceptualization of virtual publics--society, public opinion, the market--and the capitalization of production, the decline of the domestic economy, and the increase in the sexual division of labor. The most "private" pole of experience involves the privatization of marriage, the family, and the household, and the complex entanglement of femininity, interiority, subjectivity, and sexuality.

McKeon accounts for how the relationship between public and private experience first became intelligible as a variable interaction of distinct modes of being--not a static dichotomy, but a tool to think with. Richly illustrated with nearly 100 images, including paintings, engravings, woodcuts, and a representative selection of architectural floor plans for domestic interiors, this volume reads graphic forms to emphasize how susceptible the public-private relation was to concrete and spatial representation. McKeon is similarly attentive to how literary forms evoked a tangible sense of public-private relations--among them figurative imagery, allegorical narration, parody, the author-character-reader dialectic, aesthetic distance, and free indirect discourse. He also finds a structural analogue for the emergence of the modern public-private relation in the conjunction of what contemporaries called the "secret history" and the domestic novel.

A capacious and synthetic historical investigation, The Secret History of Domesticity exemplifies how the methods of literary interpretation and historical analysis can inform and enrich one another.

Michael McKeon is Board of Governors Professor of Literature at Rutgers University, the author of Politics and Poetry in Restoration England and The Origins of the English Novel, and the editor of Theory of the Novel.
Loading...
or
Not Currently Available for Direct Purchase