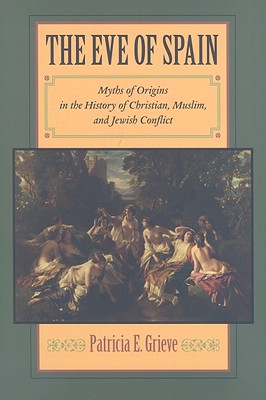 The Eve of Spain

Myths of Origins in the History of Christian, Muslim, and Jewish Conflict

The Eve of Spain demonstrates how the telling and retelling of one of Spain's founding myths played a central role in the formation of that country's national identity.

King Roderigo, the last Visigoth king of Spain, rapes (or possibly seduces) La Cava, the daughter of his friend and counselor, Count Julian. In revenge, the count travels to North Africa and conspires with its Berber rulers to send an invading army into Spain. So begins the Muslim conquest and the end of Visigothic rule. A few years later, in Northern Spain, Pelayo initiates a Christian resistance and starts a new line of kings to which the present-day Spanish monarchy traces its roots.

Patricia E. Grieve follows the evolution of this story from the Middle Ages into the modern era, as shifts in religious tolerance and cultural acceptance influenced its retelling. She explains how increasing anti-Semitism came to be woven into the tale during the Christian conquest of the peninsula--in the form of traitorous Jewish conspirators. In the sixteenth century, the tale was linked to the looming threat of the Ottoman Turks. The story continued to resonate through the Enlightenment and into modern historiography, revealing the complex interactions of racial and religious conflict and evolving ideas of women's sexuality.

In following the story of La Cava, Rodrigo, and Pelayo, Grieve explains how foundational myths and popular legends articulate struggles for national identity. She explores how myths are developed around few historical facts, how they come to be written into history, and how they are exploited politically, as in the expulsion of the Jews from Spain in 1492 followed by that of the Moriscos in 1609. Finally, Grieve focuses on the misogynistic elements of the story and asks why the fall of Spain is figured as a cautionary tale about a woman's sexuality.

Patricia E. Grieve is the Nancy and Jeffrey Marcus Professor in the Humanities at Columbia University and author of Floire and Blancheflor and the European Romance and Desire and Death in the Spanish Sentimental Romance (1440-1550).
Loading...
or support indie stores by buying on