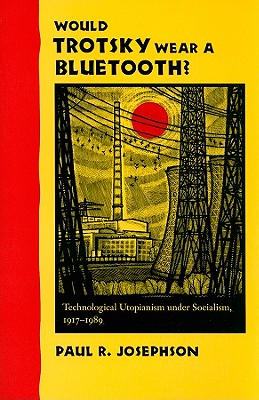 Would Trotsky Wear a Bluetooth?

After visiting Russia in 1921, the journalist Lincoln Steffens famously declared, "I have seen the future, and it works." Steffens referred to the social experiment of technological utopianism he found in the Soviet Union, where subway cars and farm tractors would carry the worker and peasant--figuratively and literally--into the twentieth century. Believing that socialism and technology together created a brave new world, Boleslaw Bierut of Poland and Kim Il Sung of North Korea--and other leaders--joined Russia's Vladimir Lenin and Leon Trotsky in embracing big technology with a verve and conviction that rivaled the western world's.

Paul R. Josephson here explores these utopian visions of technology--and their unanticipated human and environmental costs. He examines the role of technology in communist plans and policies and the interplay between ideology and technological development. He shows that while technology was a symbol of regime legitimacy and an engine of progress, the changes it spurred were not unequivocally positive. Instead of achieving a worker's paradise, socialist technologies exposed the proletariat to dangerous machinery and deadly pollution; rather than freeing women from exploitation in family and labor, they paradoxically created for them the dual--and exhausting--burdens of mother and worker. The future did not work.

The fall of the Soviet Union in 1991 marked the end of communism's self-proclaimed glorious quest to "reach and surpass" the West. Josephson's intriguing study of how technology both helped and hindered this effort asks new and important questions about the crucial issues inextricably linked with the development and diffusion of technology in any sociopolitical system.

Paul R. Josephson is a professor of history at Colby College and author of Motorized Obsessions: Life, Liberty, and the Small-Bore Engine, also published by Johns Hopkins.
Loading...
or
Not Currently Available for Direct Purchase