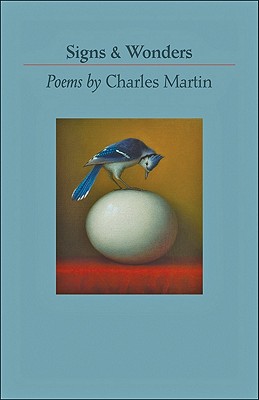 Signs is a noun (as in DO NOT DISTURB);
Wonders (as in "with furrowed brows"), a verb.

The couplet that leads into Charles Martin's fifth collection of richly inventive poems suggests that the world is to be read into and wondered over. The signs in this new work from the prize-winning American poet of formal brilliance and darkly comic sensibility are as stark as the one on a cage at the zoo that says ENDANGERED SPECIES, as surprising as those that announce the return of irony, and as enigmatic as a single word carved on a tombstone. Renowned for his translations of Ovid's Metamorphoses and the poems of Catullus, Martin brings the perspective of history to bear on the stuff of contemporary life.

Two of Charles Martin's earlier collections of poetry, What the Darkness Proposes and Steal the Bacon, were published by Johns Hopkins, as was his translation, The Poems of Catullus. In 2005 he received an Award for Literature from the American Academy of Arts and Letters.
Loading...
or
Not Currently Available for Direct Purchase