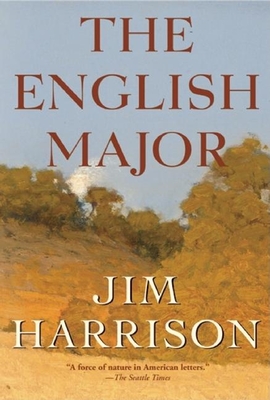 “No one compares to Jim Harrison when it comes to capturing the unique voices and attitudes of the Midwest in fiction. When 60-year-old Cliff's wife leaves him for another man and sells their farm, his life suddenly opens up in new directions, both exhilarating and terrifying. The English Major is charming from start to finish!”
— Carol Schneck, Schuler Books & Music, Okemos, MI
View the List

"It used to be Cliff and Vivian and now it isn't." With these words, Jim Harrison sends his sixty-something protagonist, divorced and robbed of his farm by a late-blooming real estate shark of an ex-wife, on a road trip across America, armed with a childhood puzzle of the United States and a mission to rename all the states and state birds to overcome the banal names men have given them. Cliff's adventures take him through a whirlwind affair with a former student from his high school-teacher days twenty-some years before, to a "snake farm" in Arizona owned by an old classmate; and to the high-octane existence of his son, a big-time movie producer in San Francisco. The English Major is the map of a man's journey into--and out of--himself, and it is vintage Harrison--reflective, big-picture American, and replete with wicked wit.