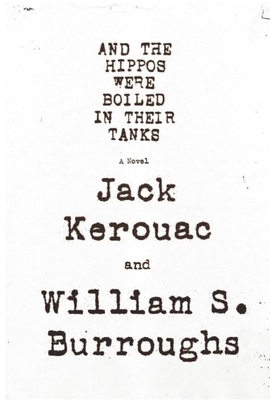 More than sixty years ago, William S. Burroughs and Jack Kerouac sat down inNew York City to write a novel about the summer of 1944, when one of their friends killed another in a moment of brutal and tragic bloodshed. The two authors were then at the dawn of their careers, having yet to write anything of note. Alternating chapters and narrators, Burroughs and Kerouac pieced together a hard-boiled tale of bohemian New York during World War II, full of drugs and obsession, art and violence. The manuscript, called And the Hippos Were Boiled in Their Tanks after a line from a news story about a fire at a circus, was submitted to publishers but rejected and confined to a filing cabinet for decades. This legendary collaboration between two of the twentieth centuries most influential writers is set to be published for the first time in the fall of 2008. A remarkable, fascinating piece of American literary history, And the Hippos Were Boiled in Their Tanks is also an engrossing, atmospheric novel that brings to life a shocking murder at the dawn of the Beat Generation.

Praise For And the Hippos Were Boiled in Their Tanks…

“[A] persuasive portrait of la vie boheme in all its aimlessness and squalor.” –Amanda Heller, The Boston Globe

“Reveals two giants-to-be in the development stages of their craft…With its evocative rendition of now-vanished saloons, bygone diners, and other landmarks of yesteryear, Burroughs and Kerouac may have inadvertently done for 1944 Greenwich Village what Joyce did for 1904 Dublin.” –George Kimball, The Phoenix (Boston)

"The appearance in print of And the Hippos Were Boiled In Their Tanks by William S. Burroughs and Jack Kerouac is a literary event, not only because it drew two of the three leading Beat writers into confederacy, but because the book told a story – of male friendship, gay obsession, and murder – that came to fascinate a score of American authors… It’s a fascinating snapshot from a lost era. If you’re looking for the link between Hemingway’s impotent post-war drifters in The Sun Also Rises, the barflies and Tralalas of Last Exit to Brooklyn and the zonked-out kids of Bret Easton Ellis’s Less Than Zero, look no further.” —John Walsh, The Independent

“In alternating chapters, Burroughs and Kerouac serve up a noir vision of Manhattan… Of the two, Kerouac, then in his early 20s, is the more developed writer, though Burroughs, an absolute beginner, already shows some of the interests and obsessions that will turn up in Naked Lunch and elsewhere, to say nothing of an obviously field-tested understanding of how syringes work… For his part, Kerouac recounts wartime experiences in the Merchant Marine, along with notes on the bar scene that would do Bukowski proud.”
—Kirkus Reviews

“[Hippos] significantly predates Kerouac’s major novels and illuminates his dynamic and productive literary friendship with William S. Burroughs. … it is very charming. … The conceit of switching back and forth between narrators every chapter also keeps things speeding along—it creates the illusion that one is listening to a radio broadcast from one station, only to have the frequency changed every few minutes, with the narrative sometimes overlapping and the two voices bleeding into another.”
—Andrew Martin, Open Letters Monthly

“If you care about either of these beat masters … I don’t see how you can fail to enjoy [And the Hippos Were Boiled in Their Tanks]. Slight as it may seem at first glance, it’s an invaluable document of literary history, glimmering with nascent genius.”
—Craig Seligman, Bloomberg News

“Naughtily sexual and emotionally grimy, written is a prose style that is deadpan-dry and larded with hardboiled atmosphere. This oddly titled novel is an engaging literary and historical curio.” —Richard Labone, Between the Lines

“Spellbinding. …with spot-on dialogue and descriptions of seedy bars and jam-packed apartments, the authors serve up a fascinating look at a time of late night parties, casual sex and a devil-may-care approach to life.” —Jackie Crosby, Minneapolis Star-Tribune

“An eccentric, engaging, and readable novel… What makes the novel particularly fascinating, however, is its ability to provide a window into the early autobiographical styles of both Burroughs and Kerouac as emerging, unpublished writers.”
—Marcus Niski, The Sydney Morning Herald

“As an insight into the formative years of the Beats, it’s fascinating.”
—Nick Rennison, The Sunday Times (London)