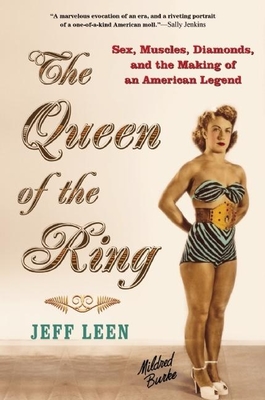 The Queen of the Ring

Sex, Muscles, Diamonds, and the Making of an American Legend

At only five foot two, Mildred Burke was an unlikely candidate for the ring. A waitress barely scraping by on Depression-era tips, she wanted more, and she saw her chance when she witnessed her first wrestling match. Even against all odds, she knew that she could become a female wrestler. What followed was a gritty, glittering testament to the golden age of wrestling, when beauty and brawn captivated the world.

Praise For The Queen of the Ring: Sex, Muscles, Diamonds, and the Making of an American Legend…

“In a class by itself. A serious history of one of this country’s goofiest pastimes...one senses that [Leen has] left no stone unturned in researching Burke’s story.”—The Washington Post

“An all-American story of a woman who rises above her downtrodden circumstances to make something of herself.”—Barry Gewen, The New York Times

“You won’t be disappointed…Leen has [Burke’s] story pinned to the mat.”—USA Today

“Jeff Leen has made a fabulous contribution to the sports-history canon. The Queen of the Ring is a marvelous evocation of an era, and a riveting portrait of a one-of-a-kind American moll.”— Sally Jenkins, author of The Real All-Americans

Jeffrey Leen is the assistant managing editor for the Washington Post's investigations unit, where his work has helped win six Pulitzer Prizes. Also the author of KINGS OF COCAINE, the first book-length investigation of Columbia's Medellin cartel, he lives in Maryland.
Loading...
or
Not Currently Available for Direct Purchase