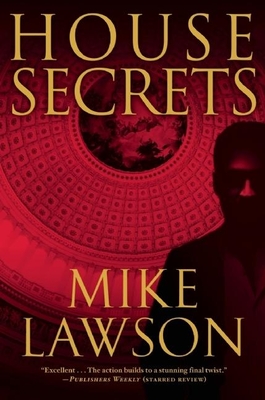 “In the latest from Mike Lawson, Joe DeMarco is is asked by the Speaker of the House to do a favor for an old friend and investigate the death of the man's son. What follows is an intricate, knotty plot, where the justice may be unconventional but is certainly appropriate. Lawson understands how the world works, how real people move through it, and he renders it with an unassumingly poetic -- and wittily cynical -- narration.”
— JB Dickey, Seattle Mystery Bookshop, Seattle, WA
View the List

Mike Lawson's previous novels starring Joe DeMarco, fixed for the Speaker of the House have earned him a loyal following from thriller aficionados and a place among the most talented and captivating thriller writers focusing on the dangerous games of our nation's capital.
In House Secrets, DeMarco is sent to investigate the death of a reporter, the son of one of his boss's old colleagues, even though it appears to be nothing more than an unfortunate accident. He soon learns that the reporter was on the trail of Senator Paul Morelli, a rising star considered a shoe-in for his party's presidential nomination. Some politicians are lucky, and Morelli has been luckier than most, but his past has already been thoroughly scrutinized and he looks clean. But then, why is DeMarco being followed by a pair of rogue agents who freelance for the CIA?
Dirty secrets, beltway politics, and divided loyalties threaten as DeMarco's investigation spirals dangerously out of control. Filled with surprising twists, a captivating plot, and excellent characters both old and new, House Secrets is Lawson's best book yet.