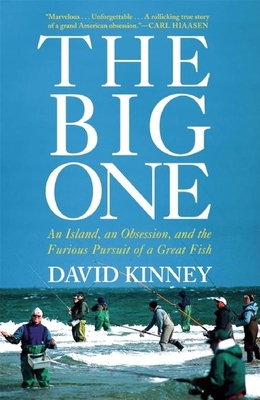 Renowned for its pristine beaches and celebrity inhabitants, Martha's Vineyard is one of the most exclusive destinations in America. But each September, after the tourists clear out, thousands of fishermen take back the beaches to compete in the Vineyard's annual fishing derby, a monthlong contest that pits plumbers against investment bankers, schoolkids against senior citizens, and natives against newcomers in a round-the-clock hunt for a great fish. Island immortality is at stake, and history has proven that anyone can win it: teenage girls, dozing fishermen, complete amateurs. In The Big One, Pulitzer Prize-winning journalist David Kinney takes readers behind the scenes at the derby to chronicle thirty-five days of fish-addled hope and heartbreak. He captures all the action and introduces us to an eccentric gallery of characters that includes: Dick Hathaway, the crotchety legend who once caught a bluefish from a helicopter; Janet Messineo, a recovering alcoholic who says that striped bass saved her life; and Lev Wlodyka, a cagey local whose next fish will spark a storm of controversy and throw the tournament into turmoil. The Big One is a hugely entertaining story of passion and obsession that does for fishing what Friday Night Lights did for football.

Praise For The Big One: An Island, an Obsession, and the Furious Pursuit of a Great Fish…

“The Big One is to competitive fishing what Friday Night Lights was to high school football—a book that uses sport as a mainline to the heart of a diverse community.” —The News & Record (Greensboro, NC)

“[Kinney] is a journalist who takes up his story with an enthusiasm that more closely resembles that of an embedded war correspondent. Many of the individuals he encounters are colorful, their salty stories more so, and he uses graceful prose to bring them together into a lively account. . . . [A] revealing look at the lives that Vineyarders lead during the ‘off season.’ ” —The Wall Street Journal

“Who knew a book about a fishing tournament could be so damn compelling?” —Deadspin

“A terrific book . . . Everyone should read one book about fishing as sports competition. This is that book.” —The Sporting News

“Fabulous . . . Unforgettable . . . The Big One had me on the edge of my seat, kept me up nights, and turned out to be one of the best books I’ve ever read.” —The Star-Ledger (Newark, NJ)