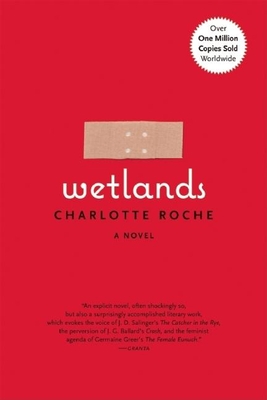 With more than one million copies sold in Germany and rights snapped up in twenty-seven countries, Wetlands is the sexually and anatomically explicit novel that is changing the conversation about female identity and sexuality around the world.
Helen Memel is an outspoken eighteen-year-old, whose childlike stubbornness is offset by a precocious sexual confidence. She begins her story from a hospital bed, where she's slowly recovering from an operation and lamenting her parents' divorce. To distract herself, Helen ruminates on her past sexual adventures in increasingly uncomfortable detail, taking the reader on a sensational journey through Helen's body and mind. Punky alienated teenager, young woman reclaiming her body from the tyranny of repressive hygiene (women mustn't smell, excrete, desire), bratty smartass, vulnerable, lonely daughter, shock merchant, and pleasure seeker—Helen is all of these things and more, and her frequent attempts to assert her maturity ultimately prove just how fragile, confused, and young she truly is.
As Helen constantly blurs the line between celebration, provocation, and dysfunction in her relationship with her body, Roche exposes the double bind of female sexuality, delivering a compulsively readable and fearlessly intimate manifesto on sex, hygiene, and the repercussions of family trauma.

“Not many literary readings are restricted to an over-eighteen audience. Fewer still take place under circus tents. Yet nothing could be more appropriate for the scandalous German best-seller Wetlands . . . a headlong dash through every crevice and byproduct, physical and psychological, of its narrator’s body and mind. It is difficult to overstate the raunchiness of the novel, and hard to describe in a family newspaper. . . . With her jaunty dissection of the sex life and the private grooming habits of the novel’s eighteen-year-old narrator, Charlotte Roche has turned the previously unspeakable into the national conversation in Germany. . . . Ardent fans have shown up to her readings with avocados as presents and, in several instances documented in the local media, the unprepared have fainted at some of the scenes.”—Nicholas Kulish, The New York Times

“An explicit novel, often shockingly so, but also a surprisingly accomplished literary work, which evokes the voice of J.D. Salinger’s The Catcher in the Rye, the perversion of J.G. Ballard’s Crash and the feminist agenda of Germaine Greer’s The Female Eunuch. . . . [Wetlands] hasn’t been out of Germany’s newspapers since publication.”—Philip Oltermann, Granta

“A sharply-written, taboo-busting black comedy, both gross and engrossing. . . . [Helen Memmel] is Florence Nightingale’s worst nightmare. . . . Wetlands, in the tradition of Sylvia Plath’s The Bell Jar, is a remarkable novel about mental illness that has been mistaken for feminist literature.”—Alice O'Keefe, Newstatesman

“‘Provocative’ is one of those publishing buzzwords reflexively used to stir up interest in the most banal of books. [But for Wetlands] the overused descriptor is tepid. . . . The novel’s utterly original, occasionally stomach-churning imagery [is] . . . probably not for Oprah’s book club.”—Anne Kingston, Maclean’s (Canada)

“If you ever wondered what you’d be like if you weren’t shy, polite, tolerant, modest, sexually repressed, logical, and constrained by modern standards of hygiene, this may be the book for you. . . . This is not a beautiful or perfect book, but an enterprising one, and its cumulative effect is admirable. . . . Our bodies mean a lot to us—even the asshole, about which far too little has been written. Every writer needs to claim a bit of territory, and assholes are there for the grabbing. Boldly, Roche takes them for her own.”—The Guardian (UK)

“Roche has created a female lead that is likeable and funny, flawed and idiosyncratic. She manages to win you over because of, not despite of, the gross stuff. . . . Helen speaks abut female sexuality in a way that is rarely heard. . . . [Wetlands] is an easy page turner of a read, with a [heroine] who doesn’t conform to mainstream ideas of femininity and a great mixture of the gross and erotic.”—Subtext Magazine

“Wetlands made me squirm-in-my-seat uncomfortable—and I loved every minute of it! Roche turns expectations about women and sexuality on their head, and does it with a frankness that’s brave and hilarious. In a world where women’s bodies are supposed to be nipped, tucked, shaved and douched, Wetlands is a much needed antidote.”—Jessica Valenti, author of The Purity Myth and Full Frontal Feminism

“[An] explicit and provocative debut novel about an eighteen-year-old girl with a very active sex life. . . . Through [protagonist] Helen Memel’s mix of eroticism and profanity, Roche attacks conventional views on hygiene, sexuality and the definition of femininity.”—Publishers Weekly

“Wetlands is at times difficult to read, but that is all the more reason to read it. Female readers will be compelled to analyze their reaction to the gross-outs of this novel, and what it says about their own ideas about femininity, but I almost hope the readers are more often male. Women: Give this book to a man who needs to read it!”—Jessica Cutler, author of The Washingtonienne

“[A] graphic, brutal scatological glimpse of one young woman’s sexual proclivities . . . Helen celebrates shattering sexual and social taboos in a way others might only dream of.”—London Lite

“[A] scandalous novel about sex, personal hygiene, and almost every conceivable part of the female anatomy [that] has taken the Teutonic literary world by storm. . . . It is the unashamedly shocking aspect of Wetlands that has turned the book into Germany’s current runaway literary success. Since the novel was published in February this year it has topped the best-seller fiction lists, with well over a million copies sold. It has become the only German book to top Amazon.com’s global best-seller list, was recently translated into Dutch, and is now doing almost as well in Holland. The novel is both an assault on the sexual and behavioral taboos that inhibit young men and women and an at times excruciatingly explicit account by the female narrator of how she goes about systematically breaking them.”—The Independent (UK)

“As the furore surrounding the publication of Wetlands has shown, there’s a very vocal segment of the population ready to accuse women who embrace pornography of some sort of treachery.”—The List

“Wetlands is first and foremost a romantic book, and it shows that our society is threatened not by the liberalization of sexual inhibitions but rather from a prudishness that hides behind silicon breasts.”—Vanity Fair (Germany)

“Roche jumps from the realm of pain to that of desire as if at the most fundamental level they were one and the same. . . . The admission of the grotesqueness of one’s own body is perhaps the most chivalrous of all acts of courtesy, as it frees others from the burden of perfection. . . . Charlotte Roche has succeeded in doing something linguistically nearly impossible: She reconciles us to the humiliations that mark the beginning of any seduction.”—Frankfurter Allgemeine Zeitung (Germany)

“There’s more to Wetlands than the graphic, bodily-function-related descriptions. The dirt, the indulging in self and others—not wanting to let go of a single bit of oneself, to the extent of trying to reinternalize any manifestation of injury or even just one's sweat and tears -- this whole back to basics (if not exactly nature) is very much just a shield for Helen, her attempt to protect herself from a world of hurt. Her ridiculously cheery tone gives the impression of a generally happy-in-her-own-filthy-skin girl, but it, too, is misleading. In fact, all she does is hurt (and yes, there' a lot of pain involved around and in recovering from the operations). . . . It is a surprisingly insightful work, even as it (or at least her indulgences) seem so absurd. But it's not an easy read. It's about as uneasy a read as one can imagine. Helen . . . mentions a lot of sex, but this is not an erotic work. Yet it feels almost pornographic, because of the childish tone and the fact that Helen is a damaged child. The emphasis on her being of (legal) age is no coincidence: she is technically an adult, and has been for a short while now, but for the most part she is just a child. This isn't a book about the freedom of not shaving one's armpits (surprisingly, Helen shaves—and is shaved—a lot—though, of course, that's also part of her problem, as it set everything in motion when she didn't do a good job of it) or a new, permissive feminism of getting down and dirty. It's simply a tender little story of a broken family and the toll it's taken on one member of it. But—and this can't be emphasized enough—it is very graphic, a book that's almost hard to hold, because you figure when you close it bodily fluids will start dripping out from between the pages.”—The Complete Review