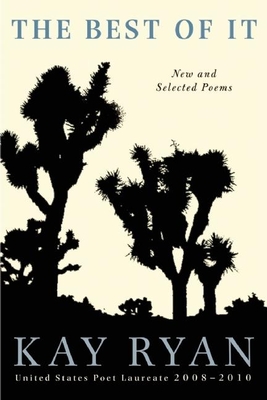 The Best of It

Kay Ryan, named the Pulitzer Prize Winner for Poetry 2010, is just the latest in an amazing array of accolades for this wonderfully accessible, widely loved poet. She was appointed the Library of Congress's sixteenth poet laureate from 2008 to 2010. Salon has compared her poems to "Faberg eggs, tiny, ingenious devices that inevitably conceal some hidden wonder." The two hundred poems in Ryan's The Best of It offer a stunning retrospective of her work, as well as a swath of never-before-published poems of which are sure to appeal equally to longtime fans and general readers.

The Best of It - Pulitzer Prize Winner for Poetry


“Everything [Ryan’s] eye falls upon takes on a brisk, beautifully complete clarity. Her tidy lines disguise an enormous intelligence and tonal warmth: a ferocious capacity for finding the essence of things. The Best of It reveals that right before our eyes Ryan has become a classic American poet.”—John Freeman, Los Angeles Times

“Ryan is one of the few contemporary poets to have imitators because she is one of the few truly compelling stylists now at work. Her voice is authoritative, confident, unfussy, exacting…she is astutely reserved, watchful, and understands that no one is special in his or her grief…So many “new and selected” volumes come out each year, but The Best of It is rare in being truly the best of the poet’s work so far. Kay Ryan is so disarming, so fresh and original, that she has earned her recent reputation as one of the very best poets among us.”—David Mason, The Hudson Review

“Ryan’s poems are consistent delights. They fizz with euphonies, they crackle with rhyme and off-rhyme…they are marvels of compact, slightly bitter wit…Ryan’s poems are what Robert Frost said all poems must be, momentary stays against confusion.”—Stephen Burt, San Francisco Chronicle

"The Best of It is a generous and nearly career-spanning collection of her verse, a greatest-hits album of a sort…you can’t help consuming [her] poems quickly, the way you are supposed to consume freshly made cocktails: while they are still smiling at you. But you immediately double back—what was that?—and their moral and intellectual bite blindsides you.”—Dwight Garner, The New York Times

“Melancholy lucidity is Ryan’s greatest gift, and it can be heard in all her most successful poems. But her most startling discovery is that melancholy, with its tendency to brood and spread, is best contained in a form that is tight, witty, almost sprightly sounding. Her poems are often built on the logic of the pun, taking an ordinary word or dead cliché as a title and then jolting it to unexpected life.”—Adam Kirsch, The New Yorker

“Ryan’s oblique humor runs from grim to whimsical, from delighted to sardonic . . . Despite her desert beginnings, she cannot disavow her own talent and taste, her intelligence and achievement . . . From a life that has not been easy, she has mined nuggets that add to American poetic wealth.”—Helen Vendler, The New York Review of Books

“Ryan…may well be the oddest and wisest poet to hold that prestigious post. Her tiny, skinny poems back a punch unlike anything else in contemporary poetry, though not unlike haiku, if haiku could be cut with a dash of Groucho Marx. This, her first retrospective volume, which also contains a book’s worth of new poems, is a much-needed introduction to the work of one of our best and most accessible poets. She asks the necessary questions hiding just beneath the obvious ones…Pithy poems manage to encapsulate far more than their few words should hold…Sassy, smart and deep as they are hilarious, Ryan’s poems are among the best.”—Publishers Weekly (starred review)

“When she’s at the top of her game, [Ryan] has the uncanny ability to construct a tiny word-mechanism that produces the experience of genuine wonder…In the utter complexity of her vision and lyricism, I’m reminded of those mechanical devices of the ancient world meant to show us our place among the stars and help us navigate the uncharted darkness beyond. And in the very best examples, Ryan’s poems do precisely that.”—Steven Ratiner, The Washington Post

“Kay Ryan is a distinctive and original voice within the rich variety of contemporary American poetry. She writes easily understandable short poems on improbable subjects. Within her compact compositions there are many surprises in rhyme and rhythm and in sly wit pointing to subtle wisdom.”—Dr. James H. Billington, Librarian of Congress

“Kay Ryan can take any subject and make it her own. Her poems—which combine extreme concision and formal expertise with broad subjects and deep feeling—could never be mistaken for anyone else’s. Her work has the kind of singularity and sustained integrity that are very, very rare.”—Christian Wiman, editor of Poetry magazine and chair of the Ruth Lilly selection committee

“[Ryan’s] poems . . . [are] surprising and fresh, keeping the reader slightly off-kilter...As the poems swerve between images and ideas, meaning and sound, white space and the black ink of a line—between surface action and metaphorical depths—the attentive reader will see a glimmer of secret life.”—Louisa Thomas, Newsweek

A Chancellor of the American Academy of Poets since 2006, Kay Ryan won the Pulitzer Prize for Poetry for The Best of It and was the Poet Laureate of the United States from 2008 until 2010. She has lived in Marin County, California, since 1971.
Loading...
or
Not Currently Available for Direct Purchase