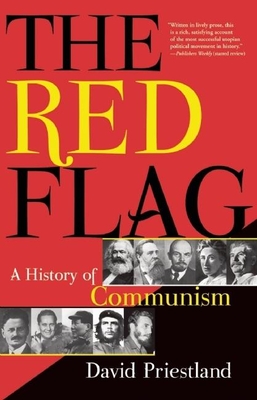 A History of Communism

Communism was one of the most powerful political and intellectual movements the world has ever seen. At the height of their influence, Communists controlled more than a third of the earth’s surface. But perhaps more astonishing than its rapid rise and extraordinary reach was Communism’s sudden, devastating collapse in November of 1989. In The Red Flag, Oxford professor David Priestland tells the epic story of a movement that has taken root in dozens of countries across two hundred years, from its birth after the French Revolution to its ideological maturity in nineteenth-century Germany to its rise to dominance (and subsequent fall) in the twentieth century. Beginning with the first modern Communists in the age of Robespierre, Priestland examines the motives of thinkers and leaders including Marx, Engels, Lenin, Stalin, Castro, Che Guevara, Mao, Ho Chi Minh, Gorbachev, and many others. He also explores the experience of what it meant to live under Communism for its millions of subjects. At a time when global capitalism is in crisis and powerful new political forces have arisen to confront Western democracy, The Red Flag is essential reading if we are to apply the lessons of the past to navigating the future.


Praise For The Red Flag: A History of Communism…

“The best and the most accessible one-volume history of communism now available . . . A far-reaching, vividly written account.” —Foreign Affairs

"Written in lively prose, this is a rich, satisfying account of the most successful utopian political movement in history." —Publishers Weekly

“Hugely ambitious and boldly achieved, The Red Flag explores the roots, perversions, and manifold intellectual and geographic developments of the most dynamic and disruptive political movement of modern times, and David Priestland’s compelling narrative explains how even in discredit and defeat it achieved a paradoxical success by forcing critical reforms in the ranks of its capitalist foes.” —Martin Walker, author of The Cold War: A History

“David Priestland offers a magnificent account of the rise and fall of Communism in the twentieth century on a global scale. He combines penetrating analysis with a strong sense of historical development, providing consistently sharp and original insights. He writes in a stylish and engaging fashion and in a spirit that is empathetic yet always critical. The use of cultural history is especially innovative and provides the reader with a vivid sense of everyday life in Communist societies. Altogether this is a remarkable book that challenges stale and stereotypical ways of thinking about the failed Communist experiment.” —Steve Smith, professor of history at European University Institute and author of Revolution and the People in Russia and China

“A mesmerizing survey of the ideological and political history of Communism. Priestland successfully crafts a global account of Communism’s development and mutation across nations and generations, deftly combining academic rigor, personal histories, and an engaging narrative. Twenty years after the fall of the Berlin Wall, The Red Flag provides a formative account of Communism’s rise and fall and its extraordinary impact on the lives of millions.” —Tristram Hunt, author of The Frock-Coated Communist: The Revolutionary Life of Friedrich Engels

“In place of demonologies and apologies, The Red Flag is a real history of modern Communism from the beginning to the present. It is an extraordinary story told with sympathy and with an incisive use of significant detail. This is a work of formidable scholarship but also a very readable book. David Priestland makes a remarkable use of novels, plays, and films to bring to life the events he describes and the states of mind that inspired them.” —Gareth Stedman Jones, professor of political science at the University of Cambridge