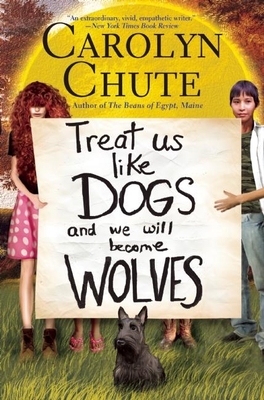 Treat Us Like Dogs and We Will Become Wolves

A compelling, compulsive follow up to The School on Heart's Content Road by "a modern-day Dickensian voice" (San Diego Union Tribune); a politically passionate portrait of a complicated, marginalized leader who refuses to silence his beliefs, and who may or may not be all that he seems. It's the height of summer, 1999, when local newspaper, the Record Sun, receives numerous tipoffs from anonymous callers warning of violence, weapons stockpiling, and rampant child abuse at the nearby homeschool on Heart's Content Road. Hungry for a big break into serious journalism, ing nue columnist Ivy Morelli sets out to meet the mysterious leader of the homeschool, Gordon St. Onge--referred to by many as "The Prophet." Soon, Ivy ingratiates herself into the sprawling Settlement, a self-sufficient counterculture community that many locals fear to be a wild cult. Despite her initial skepticism--not to mention the Settlement's ever-growing group of pregnant teenaged girls--Ivy finds herself irresistibly drawn to Gordon. Meanwhile, across town, Brianna, a gifted and disturbed teen with wild orange hair, paints her political and personal visions. At the behest of her brothers, Brianna joins the community. As her complicated, awkward relationship with Gordon unfolds, Brianna reveals herself to be a shy, yet passionate, individual, with a strange and troubling sexual past. As the newcomers are drawn deeper into Settlement life, Gordon's powerful magnetism and strange duality are exposed, and those rumors that led to his initial investigation seem, at times, to be all too possible realities. When the Record Sun finally runs its piece on Gordon, the exposure has a startling and unexpected effect on Settlement life and the world beyond it.