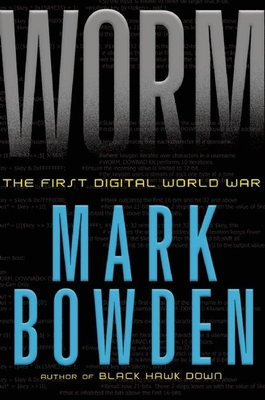 From the author of Black Hawk Down comes the story of the battle between those determined to exploit the internet and those committed to protect it--the ongoing war taking place literally beneath our fingertips. The Conficker worm infected its first computer in November 2008 and within a month had infiltrated 1.5 million computers in 195 countries. Banks, telecommunications companies, and critical government networks (including the British Parliament and the French and German military) were infected. No one had ever seen anything like it. By January 2009 the worm lay hidden in at least eight million computers and the botnet of linked computers that it had created was big enough that an attack might crash the world. This is the gripping tale of the group of hackers, researches, millionaire Internet entrepreneurs, and computer security experts who united to defend the Internet from the Conficker worm: the story of the first digital world war.

Worm is worth attention. Government officials up to and including President Obama have taken notice of Conficker and begun to address some of the issues it raised.”Bloomberg

The author takes readers behind the scenes, showing the security specialists’ increasing frenzy, not to mention occasional infighting, as they worked to defeat the worm. Along the way, the author lucidly explains how malware can take over computers as well as how the very openness of the Internet makes it vulnerable to attack.”Publishers Weekly

From the author of Black Hawk Down, a different sort of blood-and-thunder heroism narrative, out on the frontiers of cybercrime. . . . A brief, punchy reminder of our high-tech vulnerabilities.”Kirkus Reviews

Mark Bowden is the author of seven books, including Black Hawk Down, The Best Game Ever, Killing Pablo, and Guests of the Ayatollah. He reported at The Philadelphia Inquirer for twenty years and now writes for Vanity Fair, The Atlantic, and other magazines. He lives in Oxford, Pennsylvania.