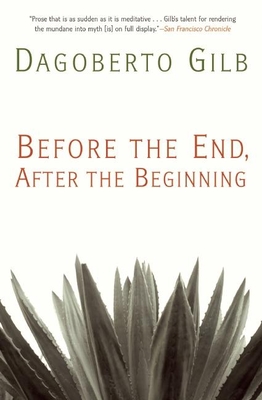 Before the End, After the Beginning (Hardcover)

Before the End, After the Beginning is a personal and honest collection of ten exquisite stories from Dagoberto Gilb. The pieces come in the wake of a stroke Gilb suffered at his home in Austin, Texas, in 2009, and a majority of the stories were written over many months of recovery. The result is a powerful and triumphant collection that tackles common themes of mortality and identity and describes the American experience in a raw, authentic vernacular unique to Gilb. These ten stories take readers throughout the American West and Southwest, from Los Angeles and Albuquerque to El Paso and Austin. Gilb covers territory familiar to some of his earlier work--a mother and son's relationship in Southern California in the story 'Uncle Rock' or a character looking to shed his mixed up past in 'The Last Time I Saw Junior'--while dealing with themes of mortality and limitation that have arisen during his own illness. Confronting issues of masculinity, sexuality, and mortality, Gilb has recovered and produced what may be his most extraordinary achievement to date.

Praise For Before the End, After the Beginning…

"[Readers] luxuriate in prose that is as sudden as it is meditative. . . . [Before the End, After the Beginning] places Gilb's talent for rendering the mundane into myth on full display."San Francisco Chronicle

"Stark, realistic, and told in mostly gritty matter-of-fact prose . . . Gilb portrays his characters simply and powerfully, without apology; even his unnamed characters represent the plight of not only every working-class Mexicano but Everyman.” Boston Globe

"Dagoberto Gilb's mission in Before The End, After the Beginning is not to dazzle and amaze, but to implode myths and misconceptions, to expose us to forgotten and subterranean characters in constant transition and exile; characters inured to injury and pain, heartbreak and woeyet who never jettison hope for a better life, nor a future uncertain, yet still very much possible. These Chicano dreamers are lovelorn and love-tossed, broken-yet-healing, but most of all, on the road to recovery from an America that shuts its eyes and ears at their very existence. Gilb shows us that every man, woman and child is a citizen of hope, succors the birthright of love and freedom in their hearts, and sin fronteras, can, and will, emerge victorious. Make no mistake about it, by the end of Before The End, After the Beginning, you will be dazzled. And amazed."ZZ Packer

The situations [in these stories] are part of the everyday, normal struggle to keep one's head above water and one's heart sane. Dagoberto Gilb writes about these matters in a mature and subtle manner.” All Things Considered, NPR

Don’t don’t dare put Gilb’s writing in any category. He’s as fine at the lyrical as he is at the vernacular. And his subject is as universal as it can get: the mystery of existence . . . Triumphantly, Gilb built this book. It’s masterful, bottom to top.” Dallas Morning News

"Of their surfaces, these are quirky, confronting, intense, often darkly funny storiesworth it for that alone. But from underneath, Gilb unearths a sense of profound human longing and a dream of harmony which (the stories makes perfecly clear) could be reached no other way."Richard Ford

"Poignant . . . [with] a keen perception of human nature . . . Gilb writes masterfully, displaying his talent for powerful storytelling. One thing is for certain and that is readers will absorb these characters and empathize and remember them. Before the End, After the Beginning is a short book but will leave an impression for a long time."Zetta Brown, New York Journal of Books

"Demonstrates that the author has more power than ever in addressing the conditions and contradictions of being split across cultures, and reminds us that every American, native or immigrant, is the product of a society that must learn to share or risk losing its founding graces."Publishers Weekly

Where are we when we are before the end yet after the beginning? We are in the midst of life, where everything happens. Before the end and after the beginning, one celebrates a perfect sixth birthday, looks for a job, has an affair, remembers old girlfriends, suffers a stroke. These are the moments Dagoberto Gilb describes in his elegiac third story collection.” New York Times Book Review

[These stories] are about the real world, where things are complex and messy, where race and sex and age and social and economic status cannot be so cleanly disentangled from one another . . . Gilb’s characters are complex in real-to-life ways . . . [Before the End, After the Beginning] will stay with you long after you are done.” Washington Independent Book Review

"The latest collection from the master storyteller . . . There is so much substance to Gilb's tales . . . The terrible things that befall a man are not always his fault, Gilb seems to say with these stories, but neither, alas, are the blessings: the children who play at your feet, that girl who accepts your kiss, and that land you return to before you die."Texas Observer

"Like [Raymond] Carver, Gilb focuses his stories on working-class men who are slowly awakening to their ineptitude at relationships, who have a hard time shaking off old addictions, and who can’t quite move their careers out of neutral. What distinguishes Gilb is his deft handling of race: The heroes in these ten sharp stories are mostly Mexican-American men who weather plenty of prejudice. . . . Gilb gets excellent mileage from simple elements. Though the men in these stories have common concerns, each feels distinct and alive."Kirkus Reviews

"[Gilb] is in fine form . . . He's simply telling good stories: of men who are both Mexican and American, who are cultured and uncouth, who look at wealth from the outside and, occasionally, from within. A student may make something of himself; a poor young father might fall through the cracks; an older man might discover something new. They are formed outside themselves, but they are no finished yet."Los Angeles Times

Gilb’s voice has an authenticity that is unimpeachable.” San Antonio Express, Best books of 2011

"Written with compassion and grace . . . This is a collection that deserves conversation."The Feminist Texican blog