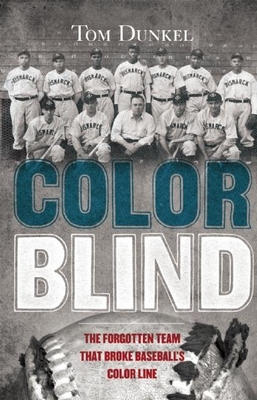 A 2013 CASEY Award Finalist for Best Baseball Book of the Year and a Booklist Top Ten Sports Book of the Year When baseball swept America in the years after the Civil War, independent, semipro, and municipal leagues sprouted up everywhere. With civic pride on the line, rivalries were fierce and teams often signed ringers to play alongside the town dentist, insurance salesman, and teen prodigy. In drought-stricken Bismarck, North Dakota during the Great Depression, one of the most improbable teams in the history of baseball was assembled by one of the sport's most unlikely champions. A decade before Jackie Robinson broke into the Major Leagues, car dealer Neil Churchill signed the best players he could find, regardless of race, and fielded an integrated squad that took on all comers in spectacular fashion. Color Blind immerses the reader in the wild and wonderful world of early independent baseball, with its tough competition and its novelty. Dunkel traces the rise of the Bismarck squad, focusing on the 1935 season and the first National Semipro Tournament. This is an entertaining, must-read for anyone interested in the history of baseball. "A tale as fantastic as it is true."--Boston Globe

Tom Dunkel is an award-winning freelance journalist with more than 25 years of experience reporting for major newspapers and magazines including The Washington Post, Sports Illustrated, New York Times Sunday Magazine, and Wall Street Journal. He lives in Washington, D.C. This is his first book.

Believe it or not: Bismarck, North Dakota, for a brief time in the 1930s, hosted the most dominant baseball team in the country, including the major leagues. Tom Dunkel has researched the story meticulously and told it beautifully, aided by a cast of characters that Hollywood might have envied. Color Blind is an amazing story of black and white that should be read all over.” John Thorn, Official Historian, Major League Baseball and author of Baseball in the Garden of Eden

Once upon a time, in a prairie town wrapped inside a Depression, a drought and the Dakotas, there lived a riddle wrapped in a mystery inside an enigma: A semi-pro baseball team half-black, half-white and half-crazy wondering if Satchel Paige would materialize so it could keep turning all of baseball’s and America’s rules about race inside-out. And wrapped it all would’ve remained if Tom Dunkel hadn’t ripped off the cover in Color Blind. . . and knocked it out of the yard.” Gary Smith, Sports Illustrated senior writer

Award-winning journalist Dunkel has not only researched and presented a virtually forgotten but very significant piece of sports history, he has also done it in a very entertaining, narrative nonfiction style. The principals, particularly Churchill and his players (including Satchel Paige) just simply come alive. Baseball fans will cherish this book, and it will become required reading among those who feel we can better understand today’s racial tensions by looking to the past. Booklist (starred review)

"A decade before Jackie Robinson broke the Major League Baseball color line in 1947, an integrated team captured the imagination of Bismarck, North Dakota . . . Dunkel delves into the history of players, towns, and baseball itself in constructing this portrait of a harmonious team rising above a segregated society. . . . a story that transcends championships, and an inspirational reflection on an otherwise dismal human rights history." Publishers Weekly

The stories of Ted Double Duty’ Radcliffe, Neil Churchill and the rest of the baseball boys from Bismarck deserve to be told alongside if not before those of Jackie Robinson, Branch Rickey and the Dodgers from Brooklyn. They lit up the diamond and toppled racial ramparts. Now, thanks to Tom Dunkel, we have those riveting tales from America’s heartland of unlikely champions and barrier-breakers.” Larry Tye, author of Satchel, the Life and Times of an American Legend

"Satchel Paige once said his interracial games helped 'put a little chink in Jim Crow.' Nowhere was that dent more audacious, more spectacular, or more flat-out fun than Satch's flirtation with prairie ball in the depths of the Great Depression. Any historian wanting to document America's bizarre racial attitudes during the days of segregation should study Tom Dunkel's wonderful book. Color Blind captures Satch and his Negro League pals at their absolute rollicking best. What a fabulous addition to the literature of our national pastime!" Timothy M. Gay, author of Satch, Dizzy, and Rapid Robert: The Wild Saga of Interracial Baseball Before Jackie Robinson

Painstakingly researched. [here] is Paige in all his maddening glory, striking out 18 batters in his first game on the Plains, and Moose Johnson fighting his losing battle with drink as the Bismarck nine travel to Wichita, Kan., for the first National Baseball Congress semi-pro tournament. All of it is played out against a sepia backdrop of drought, dust storms, and swarms of grasshoppers at the depth of the Depression.”Jay Price, Washington Independent Review of Books

Dunkel well describes the loosey-goosey, not quite minor-league level of America’s regional teams in the 1920s and 30s, with ballplayers bouncing across the map to join one team and then another. A happy story.”Bob Blaisdell, San Francisco Chronicle

This remarkable story is about race relations, American history, and the potential of the national pastime to affect the national conscience.”Chuck Haga, Star Tribune (Minneapolis)

A tale as fantastic as it is true, as American as racism and baseball. Dunkel’s extensive research shows there’s enough detail here to satisfy the most rabid fan and his portraits of Troupe, Paige, and Churchill are lively and warm.”Kate Tuttle, Boston Globe
Tom Dunkel’s wonderfully reported book Color Blind casts a spotlight on a long overlooked but fascinating corner of baseball history.”Cary Clack, San Antonio Express-News