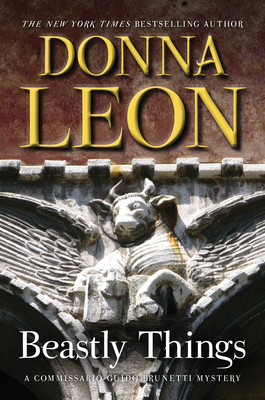 “When Brunetti begins to investigate a murder, the corpse turns out to have been a veterinarian beloved by all whose animals he treated. Why, then, did such a man work in a slaughterhouse? And what exactly was his role there? As in many of the excellent Venetian mysteries of Leon, ethics are the true subject under investigation: the ethics of the abattoir and of the consumption of meat; the ethics of decent people who, when threatened, test the waters of illegality; and the ethics of the police - always a subject for dissection in the mind of Brunetti. This may be Leon's best yet - high praise indeed.”
— Betsy Burton, The King's English, Salt Lake City, UT
View the List

When the body of a man is found in a canal, damaged by the tides, carrying no wallet, and wearing only one shoe, Commissario Guido Brunetti has little to work with. No local has filed a missing-person report, and no hotel guests have disappeared. With Inspector Vianello, Brunetti canvasses shoe stores, and winds up on the mainland in Mestre, outside his usual sphere, where they learn that the man had a kindly way with animals. Meanwhile, animal rights and meat consumption are quickly becoming preoccupying issues at the Venice Questura, as well as in Brunetti's home. With the help of Signorina Elettra, Brunetti and Vianello are able to identify the man and understand why someone wanted him dead. Subtle and engrossing, Leon's Beastly Things is immensely enjoyable, intriguing, and ultimately moving.

As if Brunetti weren’t already steaming about the mindless, atavistic greed’ motivating everything from the shabby practices of the banking industry to the irresponsible dredging of the Grand Canal, Leon hits him with a crime that really tries his soul So he takes his pleasures where he canat home with his family, in his favorite coffee bars and on long walks around Venice but after this case, the city he loves will never be quite the same for him.”Marilyn Stasio, The New York Times Book Review

Followers of the series and lovers of Venice will appreciate Leon’s fascinating details of life in this unique city. This is a strong series entry.”Dan Forrest, Library Journal

Through the 21 novels in her much-loved Guido Brunetti series, Leon has tackled various social issues, from human trafficking through immigration policy and sexual abuse, always with great sensitivity toward not only the criminal aspects of the issue but also the more ambiguous toll that societal malfunction takes on individual lives. So it is again in this wrenching tale of the murder of a quiet veterinarian, the victim of a tragedy of almost classical dimensions. A seemingly straightforward mystery written with such delicacy and emotional force that we can’t help but be reminded of Greek tragedy.” Bill Ott, Booklist (starred review)

"It is a pleasure for a reader to settle in to one of Donna Leon's Commissario Guido Brunetti mysteries, once again to have one of those glorious Italian lunches with his wife, Paola, and their children, Raffi and Chiara, and to learn, as we do in Beastly Things, which part of the seamy underside of Venetian life Brunetti will now uncover. ...This time, a body is found in one of the canals. It is eventually identified as a local veterinarian, Dottore Nava, well-loved by his patients and their owners. ... The way Brunetti figures out what happened and who killed Nava is first-rate Donna Leon plotting."Valerie Ryan, Shelf Awareness

[A] fine atmospheric novel Twenty-one books on, she has lost none of her delightful skill and wit.”Mark Sanderson, Evening Mail (UK)

"The latest Commissario Guido Brunetti Venetian police procedural is a super whodunit... Brunetti and Vianello are marvelous as they piece together clues mostly using old fashion shoe leather but also ably supported by the IT gurus Signorina Elettra and Pucetti." -The Midwest Book Review

"Brunetti is, as always, a canny commentator on Italian culture... However, it is in the poignant closing scene... where Leon's singular talents truly shine." -Book Page

"What a pleasure it is to greet Guido Brunetti... a man comfortable in his own skin, complete with quirks, foibles, and all... But, as in many of Leon's stories, the procedural is a stepping stone to bigger problems undermining the magic of Venice: venality and greed, flourishing as ever." -Christian Science Monitor

Like Dorothy Sayers’s Lord Peter Wimsey in the 1930s, Guido Brunetti has accumulated depth and subtlety book by book. In Beastly Things he learns, the hard way, unpleasant facts about the meat industry that have long since made vegetarians of his daughter and Inspector Vianello. Leon has never written a more powerful sequence than the chapter in Beastly Things where Brunetti and Vianello visit a busy slaughterhouse. Set, as always, against the living background of Venice itself, and the family background that keeps Brunetti’s moral compass straight while letting him enjoy good food, wine, and loving support, Beastly Things is a quietly satisfying celebration of the series’s twenty-first birthday. Long may it continue.”Peter Green, The New Republic

"One of the most attractive serial detectives of contemporary fiction. ... The unravelling of this intricate plot is very satisfying, yet the real pleasure of this novel lies in its evocation of a city whose shimmering beauty is set against the encroaching predations of the Mafia; a city where proper jobs are so rare that most young adults live at home with their parents, studying or wasting time; a place where your only real safety comes from having, say, four Doges in your ancestry, or a father with such powerful influence that nobody dares cross him."Sue Gaisford, The Independent (UK)

Donna Leon, born in New Jersey in 1942, has worked as a travel guide in Rome and as a copywriter in London. She taught literature in universities in Iran, China, and Saudi Arabia. Commissario Brunetti made her books world-famous. Donna Leon lived in Italy for many years, and although she now lives in Switzerland, she often visits Venice.
Loading...
or
Not Currently Available for Direct Purchase