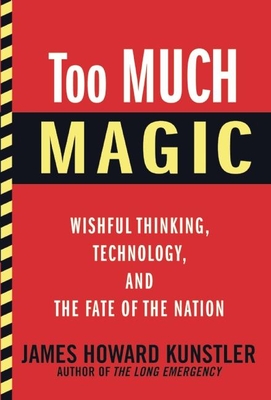 James Howard Kunstler's critically acclaimed and best-selling The Long Emergency, originally published in 2005, quickly became a grassroots hit, going into nine printings in hardcover. Kunstler's shocking vision of our post-oil future caught the attention of environmentalists and business leaders alike, and stimulated widespread discussion about our dependence on fossil fuels and our dysfunctional financial and government institutions. Kunstler has since been profiled in The New Yorker and invited to speak at TED. In Too Much Magic, Kunstler evaluates what has changed in the last seven years and shows us that, in a post-financial-crisis world, his ideas are more relevant than ever. "Too Much Magic" is what Kunstler sees in the bright visions of a future world dreamed up by optimistic souls who believe technology will solve all our problems. Their visions remind him of the flying cars and robot maids that were the dominant images of the future in the 1950s. Kunstler's image of the future is much more sober. With vision, clarity of thought, and a pragmatic worldview, Kunstler argues that the time for magical thinking and hoping for miracles is over, and the time to begin preparing for the long emergency has begun.

Praise For Too Much Magic: Wishful Thinking, Technology, and the Fate of the Nation…

Praise for Too Much Magic:

James Howard Kunstler’s new much-publicized critique of humanity, Too Much Magic, predicts peak oil, the death of the automobile and the fall of the global economy as we know it.”Huffington Post

In his latest book, Kunstler zeroes in on the central narrative of our time: that we are a highly evolved and technologically sophisticated civilization that will use our ingenuity and engineering expertise to come up with a solution to all the problems we face . . . In Kunstler’s view, this is a childish fantasy. . . . Kunstler believes that we are living on borrowed timeour banking and political systems are corrupt, our fossil fuel reserves are dwindling, the seas are risingbut we’re still partying like it’s 1959.” Jeff Goodell, Rolling Stone

Kunstler . . . delivers a cold slap to the fantasists who believe technology will save us. . . . A sharp demand to disenthrall ourselves.”Kirkus Reviews

[Kunstler’s] views are not a popular or welcomed position in America today. . . But his views about the future appear more and more to be being validated by current events. . . . In his new book, Too Much Magic, Kunstler updates his prior writings on Peak Oil stating how Americans’ long-held, ill-conceived belief that new technologies can always conquer our problems is leading us into a period of great denial and subsequent anger. . . . His new book and his prior works are worth the read. Throughout his work, he offers the surprisingly positive idea an energy limited future might well bring about many of the the things the nation at large claims to crave.”Examiner.com

James Howard Kunstler describes himself as an all-purpose writer’, and boy can he write . . . [he makes his subjects] interesting and useful to the reader, without talking down to, or boring us. . . . Too Much Magic, like The Long Emergency, is destined to become a Peak Oil classic.”Kathy McMahon, Energy Bulletin

I highly encourage you to read the book, and to check out Kunstler’s other works.”Urban Times

Kunstler’s writing is remarkably lucid, readable, incisive, accurate, and telling, making it the absolute non-fiction page turner of 2012 . . . It is a MUST READ! . . . The definitive book for anyone who is done with fairy tales and who is ready to meet the world where it really is.”Transition Voice

Kunstler is a big fan of paleo-futurism. In 2001, there was no space odyssey. We are almost to 2015 and it is unlikely there will be any of Doc Brown’s flying cars or hoverboards. The future of 2000 has not lived up to the hype of those imagining the future in 1950.”Occidental Dissent

Kunstler delivers a sobering message about what a post-oil society might look like and how we got ourselves into this situation . . . Too Much Magic is both a history lesson and a warning. The warning concerns how we as a society will have to deal with a world where cheap, plentiful oil is a thing of the past. The history lesson is all about how we came to live in such an oil-dependent society bent on expanding its suburbs to infinity . . . [A] rather sobering (and, at times, frightening) book that may keep you up nights . . . If nothing else, reading this book will get you thinking about serious societal issues, and you will likely learn something as well.”KAZI Book Review

With characteristic curmudgeonly enthusiasm, Kunstler brilliantly if belligerently shows us what a pickle we’re in and how inept we are at dealing with it.”Publishers Weekly

Anyone who has read Kunstler’s previous work will no doubt already be guessing that Too Much Magic is lively, curmudgeonly, and highly readable, as indeed it is.”The Archdruid Report

American journalist and novelist James Howard Kunstler has become widely known in urban planning and energy circles for his articulate and acerbic observations on contemporary American society and its sundry addictions, delusions and dysfunctions . . . a sharp critic of energy-sucking, big-box landscapes.”Winnipeg Free Press

Whether your comfort beverage of choice is herbal tea or single malt Scotch, you'd be well advised to lay in a large store before settling down with James Howard Kunstler's disturbing portrait of the U.S.'s impending decline, Too Much Magic. . . . Kunstler methodically skewers what he asserts is the misguided thinking of people like Ray Kurzweil (The Singularity Is Near) who reassure us we can somehow craft benign, inexpensive fixes that will permit us to continue in a lifestyle roughly resembling the one we enjoy today. . . . a disturbing picture of the decline of American society, as our current lifestyle collapses in upon itself.”Shelf Awareness

Kunstler is refreshingly uninterested in spinning a bad situation. He is willing not only to read the data about resources without illusion but also to assess the state of the culture without the triumphalism so common in the affluent world. . . . He’s not claiming a crystal ball and isn’t interested in specific prediction, nor does he have a tidy list of solutions. Instead, he points out that we can’t expect to tackle problems until we recognize them."Media with Conscience