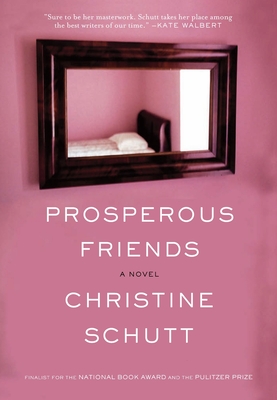 Described by John Ashbery as "pared down but rich, dense, fevered, exactly right and even eerily beautiful," Christine Schutt's prose has earned her comparisons to Emily Dickinson and Eudora Welty. In her new novel, Schutt delivers a pitch-perfect, timeless and original work on the spectacle of love. Prosperous Friends follows the evolution of a young couple's marriage as it is challenged by the quandaries of longing and sexual self-discovery. The glamorous and gifted Ned Bourne and his pretty wife, Isabel, travel to London, New York, and Maine in hopes of realizing their artistic promise, but their quest for sexual fulfillment is less assured. Past lovers and new infatuations, doubt and indifference threaten to bankrupt the marriage. The Bournes' fantasies for their future finally give way to a deepened and mature perspective in the company of an older, celebrated artist, Clive Harris, and his wife, Dinah, a poet. With compassionate insight, Schutt explores the divide between those like Clive and Dinah who seem to prosper in love and those like Ned and Isabel who feel themselves condemned to yearn for it.

Christine Schutt is the author of two collections of stories, Nightwork and A Day, A Night, Another Day, Summer. She is also the author of the novels Florida, a National Book Award finalist, and All Souls, a finalist for the Pulitzer Prize.
Loading...
or
Not Currently Available for Direct Purchase