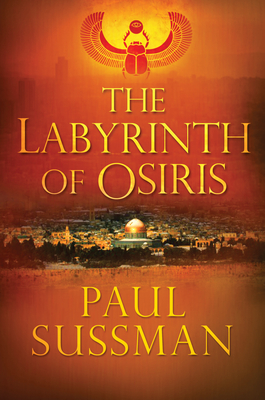 The Labyrinth of Osiris (Hardcover)

Detective Arieh-Ben Roi of the Jerusalem police is tasked with the investigation into the death of a well-known Israeli journalist, Rivka Kleinberg, who is found brutally murdered in a cathedral in Jerusalem. Known for her fearless expos's, Kleinberg had made many high-powered enemies, including international corporations, the Israeli government, and the Russian Mafia. Looking for leads, Ben-Roi begins researching which stories Kleinberg was working on before she died, and finds a connection to Egypt which confuses him. At a stumbling block, Ben-Roi phones up his old friend, Yusuf Khalifa of the Luxor Police, and asks him if he will help him investigate the case. Khalifa is happy to help, and begins looking into another story that Kleinberg was researching just before her murder: the mysterious death of a British Egyptologist in the 1930s. This Egyptologist was said to have uncovered a giant labyrinth-like gold mine of incredible riches written about in the works of Herodotus. But what connection could this gold mine have with Kleinberg's murder? With a plot that moves from Israel to Egypt to Vancouver to Romania, The Labyrinth of Osiris is an intelligent, gripping novel from an internationally acclaimed master of thriller writing.

Paul Sussman is a journalist, author and field archaeologist, whose first novel, "The Lost Army of Cambyses," was an international best seller that was translated into twenty-eight languages. He lives in London.

Praise For The Labyrinth of Osiris…

Praise for The Labyrinth of Osiris:

Taut, entertaining archaeological murder mystery-meets-spy thriller by genre-meister Sussman. . . . a trained archaeologist, [he] knows his stuffand how to make a reader jump, too. . . . A mayhem-rich view of the world through the eyes of mummies and villains, and a lot of fun.”Kirkus Reviews

Threads and connections, a whole spider’s web’s worth’ only twist . . . into even more byzantine intrigues embracing both Egypt’s ancient archaeological treasures and modern-day religious clashes. Sussman dexterously weaves the many subplots into a taught skein, never losing sight of his characters’ humanity and troubled lives.”Publishers Weekly

Its 500-plus pages travel across borders between Egypt, Israel and America and across generations, bringing to life a cast of believable characters. But it is the central charactersan Egyptian policeman and his Israeli counterpartthat really pull the reader into the tale which takes on issues including cyber-crime, sex-trafficking and sectarian hatred.”The Northern Echo

This is the fourth, and, tragically, the last thriller from the bestselling author Paul Sussman . . . an absolutely top-notch thrillercaptivating, intelligent and notably well-written, and with a depth of characterization which most thrillers don’t even attempt. Like its three predecessors, this novel combines a modern detective story with Egyptian archaeology . . . in Sussman’s hands that combination works impressively well. . . . Sussman’s plotting is terrific, as is the confidence with which he allows its story with its richly detailed contexts and characters time to develop.”The Daily Mail

Sussman must have come wearily familiar with people describing him as the thinking person’s Dan Brown.” Certainly, there are surface similarities. . . There are, however, key differences. Sussman was a far better writer. An elegant stylist, he drew a sharp pen-portrait and had an impressive grounding in archaeology . . . Sussman knew how to keep a complex plot bowling along while constantly ratcheting up the tension. He also writes unusually well about Egypt. . . . Top-drawer popular fiction and is sure to become an even bigger bestseller than Sussman’s three other novels.”The Mail on Sunday

The third in the series of police procedurals-cum-architectural thrillers that began in 2002 with Lost Army of Cambysesnovels whose stylish writing and deep research showed how careful you should be not to judge a genre by its worst examples. The Labyrinth of Osiris reunites Yusuf Khalifa of the Luxor police and Jerusalem detective Arieh Ben-Roi . . . It's the three-dimensionality of the characters that makes the package work so well; what a shame there won't be another.”The Guardian

If Paul's past books are anything to go on it's a must-read. He enters the world of the ancients with such ease and veracity.”Terry Jones

[Sussman is] hands down one of the best writers of international suspense . . . excitement melds with adventure . . . bone chilling thrills, a flair for the macabre, and off-the-charts suspense. Superb.”Steve Berry, author of The Charlemagne Pursuit on The Hidden Oasis

Sussman has managed the impossible: a multilayered quest where all the characters are real and alive, and we should expect the completely unexpected.”Katherine Neville, author of The Fire and The Eight on The Last Secret of the Temple

[A] gripping mystery, intricately plotted and eloquently told . . . not just thrilling, it makes the tension and promise of the Middle East heartbreakingly alive”William Dietrich, author of Napoleon’s Pyramids on The Last Secret of the Temple

[A] thriller on par with the best literature out there.”James Rollins, The New York Times best-selling author of Black Order and The Judas Strain on The Last Secret of the Temple

[An] intelligent, compelling, beautifully written thriller. . . a rip-roaring gem of a read.”Raymond Khoury, author of The Last Templar on The Hidden Oasis