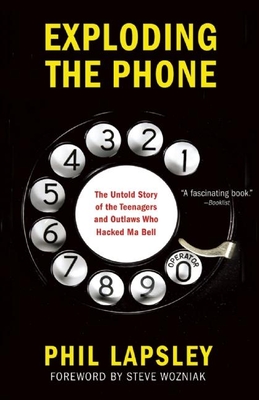 Before smartphones, back even before the Internet and personal computer, a misfit group of technophiles, blind teenagers, hippies, and outlaws figured out how to hack the world's largest machine: the telephone system. Starting with Alexander Graham Bell's revolutionary "harmonic telegraph," by the middle of the twentieth century the phone system had grown into something extraordinary, a web of cutting-edge switching machines and human operators that linked together millions of people like never before. But the network had a billion-dollar flaw, and once people discovered it, things would never be the same. Exploding the Phone tells this story in full for the first time. It traces the birth of long-distance communication and the telephone, the rise of AT&T's monopoly, the creation of the sophisticated machines that made it all work, and the discovery of Ma Bell's Achilles' heel. Phil Lapsley expertly weaves together the clandestine underground of "phone phreaks" who turned the network into their electronic playground, the mobsters who exploited its flaws to avoid the feds, the explosion of telephone hacking in the counterculture, and the war between the phreaks, the phone company, and the FBI. The product of extensive original research, Exploding the Phone is a ground-breaking, captivating book.

Praise For Exploding the Phone: The Untold Story of the Teenagers and Outlaws Who Hacked Ma Bell…

Lapsley uses his main subject as a jumping-off point for a highly engaging history of the telephone itself and plenty of intrigue. Sure, these guys, these [phone] phreaks, were breaking the law, but they were also innovators, technological geniuses, precursors of today’s computer hackers. A fascinating book.” David Pitt, Booklist

A rollicking history of the telephone system and the hackers who exploited its flaws. [Lapsley] weaves together a brilliant tapestry of richly detailed stories A first-rate chronicle of an unexamined subculture.” Kirkus Reviews (starred review)

Phil Lapsley's Exploding the Phone is an authoritative, jaunty and enjoyable account of their sometimes comical, sometimes impressive and sometimes disquieting misdeeds. The author's love of his subject pervades Exploding the Phone and persuaded this reader, at least, that the phone phreaks are worthy of thoughtful attention.” Howard Schneider, The Wall Street Journal

A deep dive into how the telephone network evolved, and how the phreakers came to launch their assaults on the integrity of the networks, the book is at once enjoyable and educational. Especially in an era where hackers are among the biggest stars around.” Daniel Terdiman, CNET

A fascinating book steeped in the rich history of phreakers and hackers.” Xeni Jardin, BoingBoing.net

Exploding the Phone opens like a cold war spy caper, with a young, incurably curious Harvard student discovering a cryptic message in the classified section of the student newspaper in 1967... The produce of years of research this is the eminently interesting and completely original history of the proto-hackers (counting among their number a couple of youngsters named Steve Wozniak and Steve Jobs).” Nicholas Mancusi, The Daily Beast

"Phil Lapsley's great history of those hackers is packed with schemes, plots, discoveries, and brainy, oddball personalities... [The stories] he uncoversand the questions he poses, about the nature of the relationship between criminality, curiosity, and technologyis compelling, fascinating stuff." Alison Hallett, Portland Mercury

Fascinating Exploding the Phone manages to pull of the seemingly impossible make one nostalgic for the days of busy signals, operators and rotary dials.” Greg Di Cresce, Winnipeg Free Press

A rocking great read about the unknown teenagers and hobbyists who defied AT&T when it was foolish to do so. In Lapsley's magnificent research he has uncovered what amounts to a secret pre-history of the computer and internet revolutions.”Tim Wu, author of The Master Switch

With terrific reporting and story-telling. Phil Lapsley has put voluptuous flesh and bones on the legendary tales of the phone phreaks.”Steven Levy, author of Hackers and In the Plex

A rocking great read about the unknown teenagers and hobbyists who defied AT&T when it was foolish to do so. In Lapsley's magnificent research he has uncovered what amounts to a secret pre-history of the computer and internet revolutions.” Tim Wu, author of The Master Switch

"The definitive account of the first generation of network hackers the scruffy rebels who first plumbed the secrets of the global telephone network, and accidentally earned the wrath of everyone from AT&T to the FBI. At turns a technological love story, a counter cultural history and a generation-spanning epic, Phone Phreaks is obsessively researched and told with wit and clarity. It captures a moment in time that might otherwise have been lost forever."-Kevin Poulsen, news editor of Wired.com and author of Kingpin

Before he was the god of sexy computers, Steve Jobs sold blue boxes to Hollywood stars and Bay Area hippies. Exploding the Phone connects the cultural lines that run from hacking Ma Bell to building personal computers. Here, for your amusement, is the story of the frothy counterculture that helped create today’s connected world.”Thomas A. Bass, Author of The Eudaemonic Pie and The Spy Who Loved Us

"Seldom are criminals this much fun. Even the phone company had a soft spot for these misfits. They are as well-behaved a band of troublemakers as you are ever likely to meet." Robert Sabbag, author of Snow Blind

With verve and technical accuracy, Phil Lapsley captures the excitement of the days when phone hackers explored Ma Bell's cabled paradise of dial phones and electromechanical switches. When a call across the country cost $5 and operators placed person-to-person calls, teenagers saw the chance to exploit the system, trying to stay a step ahead of police and telephone technicians. Here's the intriguing story of those first electronic adventurers - tinkerers who'd bypass a pay phone with a couple transistors or reach around the world by whistling.”Cliff Stoll, author of The Cuckoo's Egg

"[Written] with technical depth and an obsessive amount of research. In addition to conducting numerous primary interviews, Lapsley filed over 400 freedom of information requests with the FBI, DOJ, CIA, NSA, FCC, and the National Archives while writing the book. Intriguing details culled from thousands of pages of government records, most notably the FBI files on various phone phreaks, fill the book’s pages." -Salon

Lapsley more than ably conveys the nuances of this fascinating slice of technological history and his enlightening new interviews with most of the major phreaks as well as AT&T security officers form one of the most significant levels of his tremendous research. Fans of Brian Falkner’s Brain Jack, Ernest Cline’s Ready Player One, and other hacker tales, along with anyone who’s ever tried to liberate their iPhone, should be fascinated even before Steve Jobs and Steve Wozniak show up to bridge the transition from phone phreaks to computer geeks.”Mark Flowers, School Library Journal

"A fascinating story about a period of time that I lived through but didn't know much about. I can't imagine how much work Lapsley had to do to write this bookit is remarkably well-researched, fun to read, and deserves great praise."Vint Cerf, Internet Pioneer and Chief Internet Evangelist, Google, Inc.

Phil Lapsley co-founded two high technology companies in the San Francisco Bay Area and was a consultant at McKinsey & Company where he advised Fortune 100 companies on strategy. He holds a Master's degree in electrical engineering and computer sciences from U. C. Berkeley and an MBA from the MIT Sloan School of Management. Lapsley has been interviewed by NPR and the BBC and quoted in The New York Times and Boston Globe on telephone and computer security issues, and is the author of one textbook, sixteen patents, an Internet standard, and many technical articles.
Loading...
or
Not Currently Available for Direct Purchase