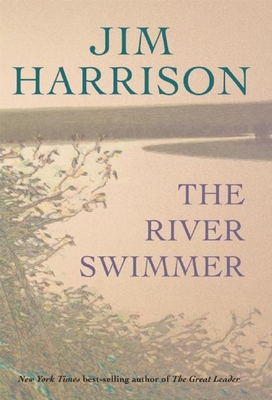 Jim Harrison is one of America's most beloved and critically-acclaimed authors--on a par with American literary greats like Richard Ford, Anne Tyler, Robert Stone, Russell Banks, and Ann Beattie. His latest collection of novellas, The River Swimmer, is Harrison at his most memorable: a brilliant rendering of two men striving to find their way in the world, written with freshness, abundant wit, and profound humanity. In The Land of Unlikeness, sixty-year-old art history academic Clive--a failed artist, divorced and grappling with the vagaries of his declining years--reluctantly returns to his family's Michigan farmhouse to visit his aging mother. The return to familiar territory triggers a jolt of renewal--of ardor for his high school love, of his relationship with his estranged daughter, and of his own lost love of painting. In Water Baby, Harrison ventures into the magical as an Upper Peninsula farm boy is irresistibly drawn to the water as an escape, and sees otherworldly creatures there. Faced with the injustice and pressure of coming of age, he takes to the river and follows its siren song all the way across Lake Michigan. The River Swimmer is a striking portrait of two richly-drawn, profoundly human characters, and an exceptional reminder of why Jim Harrison is one of the most cherished and important writers at work today.

Praise For The River Swimmer: Novellas…

Praise for The River Swimmer

In his fiction, especially, [Harrison has] hit a deep groove. His meditations on mortality are blended with an antic wit. . . . Mr. Harrison’s new book, The River Swimmer . . . contains some of the best writing of his career. Both novellas burn brightly with what he calls, at one point, unmitigated cupidity,’ not for money or possessions but for life and experience. . . . He is among the most indelible American novelists of the last hundred years . . . Mr. Harrison contains multitudes; like a good rabbit liver pâté, there is a lot of him to spread around. . . . If The River Swimmer is any indication, he remains at the height of his powers.”Dwight Garner, The New York Times

Trenchant and visionary . . . Harrison is a writer of the body, which he celebrates as the ordinary, essential and wondrous instrument by which we measure the world. Without it, there is no philosophy. And with it, of course, philosophy can be a rocky test. . . . I could feel Jim Harrison grinning . . . in his glorious novella The River Swimmer.”Ron Carlson, The New York Times Book Review

[Harrison] has crafted gorgeous and wry sentences out of the quiet raging against the indignities and infirmities of age. And, in Clive, he has created another indelible and soulful rascal. . . . Harrison is one of our greatest voices of aging both clumsily and well and of teasing out hope amid sentimentality and dread.”Ian Crouch, The Boston Globe

You can’t escape your true nature, Jim Harrison’s two new novellas assert. . . . Here, he’s achieved a mood that approximates in modern terms the tranquility of Shakespeare’s late romances. The existential uncertainties that always animate Harrison’s fiction are not so much resolved as accepted for what they are: the basic fabric of existence, from which we pluck as much happiness as we can.”Wendy Smith, The Washington Post

[Harrison’s] latest book of novellas . . .deepens and broadens his already openhearted and smart-minded sense of the way we live now, and what we might do to improve it. . . . Harrison [is] the reigning master of the [novella] form. . . . I have to say that Harrison has been hard put to better his personal best, Legends of the Fall. . . . But with the lead piece in this new book, the autumnal novella he calls The Land of Unlikeness,’ he comes quite close. . . . The new novella is . . . no less intense, as it enriches and enlarges an emotion-charged period in the life of Clive, a divorced Midwestern painter-turned-critic. . . . What does the male version of quality of life really mean? Something like this, something like this. And female readers who don’t give over some time to studying Harrison’s version of it will be as foolish as the men.”Alan Cheuse, NPR

Ever since writing Legends of the Fall 30 years ago, Jim Harrison has produced a steady stream of novellas demonstrating what a writer can do in approximately 100 pages. The trick to a good novella is to give the same richness of story, action and characters as one finds in a full-length novel. At its best, it is a novel shorn of fat, full of story.”Steve Novak, Minneapolis Star Tribune

Tales of manhood and magic . . . Harrison addresses with insight and humor such themes as the human relationship to the natural world, the powers of sexuality and violence, the uses of art, the line between sanity and madness, and the shadow of mortality.”Colette Bancroft, Tampa Bay Times

Exquisite . . . While the first novella is about the constancy of the past to reassert itself in our lives, the second focuses on the inescapable currents that bear us into the future. . . . The two novellas masterfully treat themes that will be familiar to Harrison’s readers the disjunction between contemporary life and rural terrain, our inability to escape the past, the vapidity of urbanity. The writing is sparse but powerful. . . . this diptych of a collection is a joy.”Ted Hart, Kansas City Star

Jim Harrison is a master of the novella form.”Steve Byrne, Detroit Free Press

The ways in which [the two novellas] complement and contrast with each other attests to [Harrison’s] range. . . . Everyday epiphanies from a major author.”Kirkus Reviews

[A] fine new collection . . .Harrison’s novellas are each striking in their own ways, rich and satisfying.”Publishers Weekly

Harrison is one of America’s great literary treasures; his rugged, beautifully tough-minded works help define America and its wide-open spaces, and his readers form almost a cult. Here, he will delight them.”Barbara Hoffert, Library Journal

Jim Harrison is the author of over thirty books of poetry, nonfiction, and fiction, including Legends of the Fall, The Road Home, Returning to Earth, and The Summer He Didn't Die. A member of American Academy of Arts and Letters and winner of a Guggenheim Fellowship, he has had work published in twenty-seven languages. Harrison lives in Montana and Arizona.