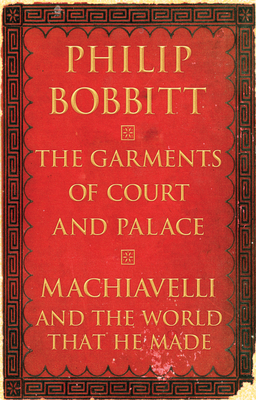 The Garments of Court and Palace (Hardcover)

Machiavelli and the World That He Made

The Prince, a political treatise by the Florentine public servant and political theorist Niccolo Machiavelli is widely regarded as the single most influential book on politics--and in particular on the the politics of power--ever written. In this groundbreaking book, Philip Bobbitt explores this often misunderstood work in the context of the time. He describes The Prince as one half of a masterpiece that, along with Machiavelli's often neglected Discourses prophesies the end of the feudal era and describes the birth of the neoclassical
Renaissance State. Using both Renaissance examples and cases drawn from our current era, Bobbitt situates Machiavelli's work as a turning point in our understanding of the relation between war and law as these create and maintain the State. This is a fascinating history and commentary by the man Henry Kissinger called "the outstanding political philosopher of our time.

Philip Bobbitt has taught constitutional law and international security and strategy at the University of Texas, Harvard, and Columbia, where he has a permanent chair and is Director of the Center for National Security. He was Legal Counsel to the Senate's Iran-Contra Committee, Counselor for International Law at the State Department under George H. W. Bush, director for Intelligence Programs at the National Security Council, senior director for Critical Infrastructure, and senior director for Strategic Planning under Bill Clinton. The author of The Shield of Achilles, and Terror and Consent, he lives in New York, London, and Austin.

Praise For The Garments of Court and Palace: Machiavelli and the World That He Made…

With his profound knowledge of history, philosophy, politics and law, Professor Bobbitt has made a major contribution to penetrating the thought of Machiavelli and illuminating its context. This extraordinary intellectual endeavor may well become a new standard interpretation.” Henry A. Kissinger

Riddles for centuries, the beginning and ending of Machiavelli’s The Prince have finally found a plausible explanation. Provocative.” Bryce Christensen, Booklist