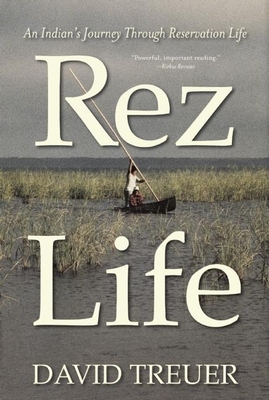 Celebrated novelist David Treuer has gained a reputation for writing fiction that expands the horizons of Native American literature. In Rez Life, his first full-length work of nonfiction, Treuer brings a novelist's storytelling skill and an eye for detail to a complex and subtle examination of Native American reservation life, past and present. With authoritative research and reportage, Treuer illuminates misunderstood contemporary issues like sovereignty, treaty rights, and natural-resource conservation. He traces the convoluted waves of public policy that have deracinated, disenfranchised, and exploited Native Americans, exposing the tension and conflict that has marked the historical relationship between the United States government and the Native American population. Through the eyes of students, teachers, government administrators, lawyers, and tribal court judges, he shows how casinos, tribal government, and the Bureau of Indian Affairs have transformed the landscape of Native American life. A member of the Ojibwe of northern Minnesota, Treuer grew up on the Leech Lake Reservation, but was educated in mainstream America. Treuer traverses the boundaries of American and Indian identity as he explores crime and poverty, casinos and wealth, and the preservation of his native language and culture. Rez Life is a strikingly original work of history and reportage, a must read for anyone interested in the Native American story.

An affecting portrait of his childhood home, Leech Lake Indian Reservation, and his people, the Ojibwe.”The New York Times

[Rez Life] is not, for all its intimacy, just as it is not exactly a work of reportage or a work of history. Rather, it is a nuanced hybrd, a memoir, broken into six chapters, each of which begins in the personal, then expands outward to a larger theme. Sovereignty, fishing, treaty rights, the tribal justice system, education, language and assimilation Treuer examines all of it, finding associations between the broadest stories and the most individual.”David Ulin, Los Angeles Times

[Treuer’s] upbringing on an Ojibwe reservation in Minnesota makes him adept at delving behind stereotypes of Indian life and infuses his account with passion and meticulousness.”The New Yorker

"Smartly, this book blends journalism, history and memoir... to provide both anecdotes of present-day reservation life and history... Treuer's message - the picture he gives of Indian reservation life today - is not one of defeat or demise but of miraculous survival."Greg Sarris, San Francisco Chronicle

Rez Life is a fascinating, air-clearing look at Native American reservation life, strengthened in equal measure by its anecdotes and its scholarly attention.”Jonathan Messinger, Time Out Chicago

Blends memoir and history to reveal what life on a reservation is really like - neither the festival of dysfunction nor the oasis of noble, nature-loving stoics that many non-Indians imagine. [A] blistering, illuminating, ultimately hopeful book.”Kate Tuttle, Boston Globe

"An invaluable study and vivid account of problematic life on our reservations by a writer--a very good writer!--raised 'on the rez' who knows what he's talking about only too well and also knows how to tell a story, lots of stories, that document and effectively banish a number of misconceptions still held by white society. Highly recommended." Peter Matthiessen

Out of the people and places of Native America David Treuer has crafted a story of vital interest to all Americans." Vice President Walter Mondale

Applied to a book, the word important’ can glaze the eyes. An important’ book sounds like an earnest, educational one you should read, when you get to it, someday, maybe. Rez Life is important in the word's best sense -- one you'll want to read if you're at all curious about contemporary American Indians. It's important in the way Dee Brown's Bury My Heart at Wounded Knee was when it came out in 1970, deeply moving readers as it schooled them about Indian history in a way nothing else had.”Pamela Miller, Minneapolis Star-Tribune

Treuer sees all the poverty, the gangs and the alcohol, but he also sees great beauty in some of the last places untouched by commercial development. He hears the stories of his people in the language of his people, and he sees the pride of survivors.”Neal Conan, NPR

David Treuer is the author of three novels--Little, The Hiawatha, and The Translation of Dr. Appeles-- and Native American Fiction: A User's Manual, a book of essays. A professor of literature and creative writing at USC, Treuer is the co-editor of the American Indian Culture and Research Journal. He divides his time between Los Angeles and Leech Lake Reservation in Minnesota.
Loading...
or support indie stores by buying on