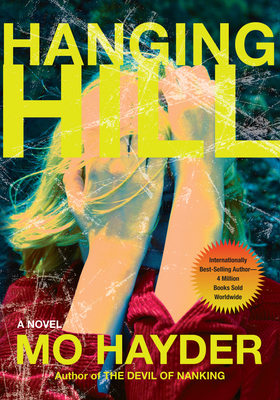 " Hayder] has in no way lost her ability to shock, thrill, entertain and occasionally torture us with her use of words. . . . A chiller to the very end. Hayder deals with Britain at its grittiest." --Peter Millar, The Times (London) Mo Hayder is a world-class author of gritty, gripping page-turners, winner of the Dagger in the Library from the Crime Writers' Association for outstanding body of work. With her latest novel, she ratchets up the terror to fever pitch. Fast-paced and addictive, Hanging Hill centers around a pair of estranged sisters--one a cop, one a coddled wife fallen on hard times--and the gruesome homicide of a teenage beauty, which exposes the nightmares that lurk at the edges of our safe domestic lives. One morning in picture-perfect Bath, England, a teenage girl's body is found on the towpath of a canal. Lorne Wood--beautiful, popular, and apparently the victim of a disturbingly brutal murder. Why was she on the towpath alone late at night? Zoe Benedict--Harley-riding police detective, independent to a fault--is convinced the department head needs to look beyond the usual domestic motives to solve the case, but no one wants to hear it, especially from the department's black sheep. Meanwhile, Zoe's sister, Sally--recently divorced and in dire financial straits, supporting a daughter who was friends with the dead girl--has begun working as a housekeeper for a rich entrepreneur who seems less eccentric and more repugnant, and possibly dangerous. And why are his sinister associates showing up at her daughter's school? When Zoe's investigation turns up evidence that Lorne's attempts to break into modeling had delivered her into the world of webcam girls and amateur porn, a crippling secret from Zoe's past seems determined to emerge. All roads seem to be leading to one conclusion: there's something very wrong at the house on Hanging Hill. But will Zoe and Sally put their differences aside and fit all the pieces together before it's too late? Hanging Hill is a masterful, terrifying book that will have readers sleeping with the lights on.

Mo Hayder has worked as a filmmaker, Tokyo nightclub hostess, and English language teacher. She is the winner of the Edgar(R) Award for Best Novel for Gone and the 2011 Crime Writers' Association Dagger in the Library award for outstanding body of work. She is also the author of Birdman, The Treatment, The Devil of Nanking, Pig Island, Ritual, and Skin. She lives in England.
Loading...
or support indie stores by buying on