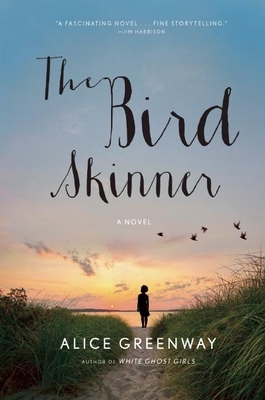 “Following the amputation of one of his legs, ornithologist Jim Carroway withdraws from the world and settles on an island off the coast of Maine. His alcohol- and cigarette-filled solitude is interrupted when the daughter of a friend he hadn't seen in 30 years arrives unannounced from the Solomon Islands. Jim's memories of being stationed there during WWII as a coast watcher, as well as memories of his past life as a scientist, husband, and father, come back to haunt him over the summer the two spend together. Rich in fascinating cultural and scientific details, The Bird Skinner is a compassionate but objective exploration of the psychology of a broken man.”
— Pierre Camy, Schuler Books & Music, Grand Rapids, MI
View the List

Jim Kennoway was once an esteemed member of the ornithology department at the Museum of Natural History in New York, collecting and skinning birds as specimens. Slowing down from a hard-lived life and a recent leg amputation, Jim retreats to an island in Maine: to drink, smoke, and to be left alone. As a young man he worked for Naval Intelligence during World War II in the Solomon Islands. While spying on Japanese shipping from behind enemy lines, Jim befriended Tosca, a young islander who worked with him as a scout. Now, thirty years later, Tosca has sent his daughter Cadillac to stay with Jim in the weeks before she begins premedical studies at Yale. She arrives to Jim's consternation, yet she will capture his heart and the hearts of everyone she meets, irrevocably changing their lives. Written in lush, lyrical prose--rich in island detail, redolent of Maine in summer and of the Pacific--The Bird Skinner is wise and wrenching, an unforgettable masterwork from an extraordinarily skillful novelist.

Praise For The Bird Skinner…

An Indie Next Pick for January 2014

"Bracing . . . Greenway’s thrilling evocation of young love . . . is as fresh as it is heartbreaking. With an attention to detail that’s both poetic and precise . . . The Bird Skinner knows we are animals, all of us. The natural world is everywhereand despite undeniable beauty, it's rarely pretty." Joanna Hershon, New York Times Book Review

"Sensitively written and gently understanding of human frailty. . . . Greenway’s rapturous prose and warm empathy assert that there is beauty to be found in even the unhappiest lives." Washington Post

"A fascinating novel . . . the reader will have a hard time putting this book down." Christian Science Monitor

"It’s not every day you come across a novel that connects a Maine island with one of the Solomon Islands . . . in a love story that weaves together World War II, ornithology, Robert Louis Stevenson, regret, and ultimately, love." National Geographic Traveler

"In lush, expressive prose . . . The Bird Skinner is capacious . . . this is a novel that soars." Minneapolis Star Tribune

"Evocative . . . image-rich . . . The distinctive environments of disparate islands, interwoven with alternately romantic and horrific flashbacks, create a beautiful, ultimately painful story as haunting as its settings. Gifted at evoking places in the past, Greenway is at her most poignant in moments when outsiders and natives, from hot climates and cold, come face to face, attempting to connect across geographic, cultural, emotional, and psychological divides." Publishers Weekly

"Greenway’s limpid, poetic prose; her richly nuanced portrait of a nicely varied cast of characters on both Fox and Manhattan islands; and her evocative depiction of natural landscapes . . . [is] sensitive and finely written." Kirkus Reviews

"A fascinating novel with the peculiar combination of ornithology and World War II in the South Pacific, birds and death, and the survivors who not so much survive as endure. This is a rich stew pervaded by fine story telling." Jim Harrison, author of The River Swimmer

"Spirited and moving . . . Greenway has a marvelous sense of place and history. Her evocation of the war in the Solomons, and her description of the island in Maine, are pitch-perfect." Frances FitzGerald, author of Fire in the Lake: The Vietnamese and the Americans in Vietnam

"Greenway creates intensely believable characters who come from other places and other times. The Solomon Islands become characters as rich and three-dimensional as any other. She captures so well the unsleeping tragedies of the past, and how these bear in upon the present." Helen Dunmore, author of The Siege

"A romance, a compelling story, an illumination of what birdwatching is all about, The Bird Skinner has all the earmarks of a natural history classic." Marie Winn, author of Central Park in the Dark: More Mysteries of Urban Wildlife

"What a setup: A young girl named Cadillac from an island in the South Pacific, en route to Yale Medical School, arrives at the front door of a crotchety old man on a Maine island in Penobscot Bay. The stage is set for this beautifully-written tale of generational tension and kindness, memories and mysteries, war and love, bombs and birds. A wonderful read." Jim Sterba, author of Frankie’s Place: A Love Story

Alice Greenway lived the itinerant life of a foreign correspondent's child, growing up in Hong Kong, Thailand, Israel and the United States. As an adult, she has divided her time between the United States and Britain. Her first novel White Ghost Girls, set in Hong Kong in the 1960s, won the Los Angeles Times Art Seidenbaum Award For First Fiction and was on the Orange Prize longlist. She currently lives in Scotland.
Loading...
or
Not Currently Available for Direct Purchase