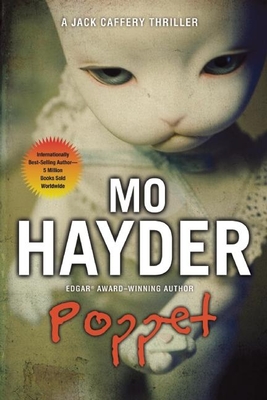 "Poppet . . . oozes sinisterness from the first page. . . . Its] high-wire tension . . . never wavers."--Tina Jordan, Entertainment Weekly Mo Hayder has for years been a master of chilling, seamlessly plotted thrillers that keep the reader glued to the page long after lights out. Her world-class body of work has netted international renown, numerous awards and accolades, and a devoted following of readers around the globe. Recently awarded the Edgar Award for Best Novel for Gone, Hayder is at the top of her game, and Poppet is Hayder at her most terrifying: a gripping, edge-of-your-seat novel set in a high-security mental health ward. Something is not right at Beechway psychiatric unit. First one resident turns violently to self-harm, then another to suicide--both recalcitrant patients with no prior history of self-directed violence. Whispers between the inmates have traveled to the staff that the place is being terrorized by a creature called The Maude. Clinic higher-ups dismiss this as superstition, but the surviving victim certainly saw something. And what of the drawing the dead woman left behind, showing the creature wearing the sweater of a recently released patient? When staff Nurse AJ LeGrande calls on Detective Jack Caffery to investigate, what he learns about what's going on inside and outside the hospital will shock readers and place individuals beyond the ward walls in danger. And what of Flea Marley, the police diver whose dark secret Caffery has been keeping? Can he save her from herself, or will she take him down with her? Mo Hayder is renowned for conjuring nightmares that sink under the skin. In Poppet she has delivered a taut, unbearably suspenseful novel that will not let readers go. "Mo Hayder has written some of the grisliest crime fiction in recent memory. . . . Nowhere is Hayder's portrayal more nuanced and compelling than in Poppet. . . . A compelling mystery that will cause fans and new readers alike to ponder not just who did it, but why."--Paula L. Woods, Los Angeles Times "Poppet is a seriously dark piece of work, but that's what Mo Hayder does best. . . . A truly frightening, and at times grotesque, read."--Sherryl Connelly, New York Daily News

Mo Hayder has worked as a filmmaker, Tokyo nightclub hostess, and English language teacher. She has won the Edgar Award for Best Novel for Gone and the Crime Writers' Association Dagger in the Library award for outstanding body of work. She is also the author of Birdman, The Treatment, The Devil of Nanking, Pig Island, Ritual, Skin, Hanging Hill, and Wolf. She lives in England.
or
Not Currently Available for Direct Purchase