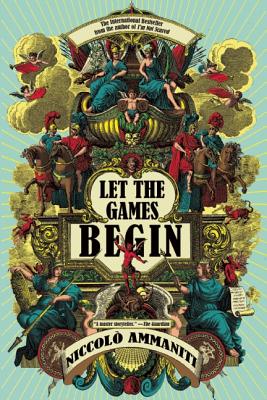 You are invited to attend the most decadent fete of the century. Italian high-society and international celebrities are gathered at Villa Ada, once a sprawling public park, now the largest private home in Rome. The host, a rags-to-riches tycoon, has planned an extraordinary wild animal safarithe party to end all parties.

Among the guests is Fabrizio Ciba, a neurotically charming author struggling to write his next great literary tome in order to rebuild his reputation. In an unexpected turn of events, he crosses paths with a beautiful, enigmatic pop singer and the Wilde Beasts of Abaddon, a fledgling satanic sect planning her demise in exchange for global fame. The world outside the mansion gates is soon forgotten, and all rules of civility are broken. What was intended as the most spectacular night quickly descends into apocalyptic chaos as the excesses of modern life are indulged to extremes. What mayhem will ensue once the games begin?

Internationally best-selling author Niccolò Ammaniti strikes a masterful balance between farce and tragedy as he brings a rapturous dose of anarchic absurdity to this portrait of a status-obsessed, self-indulgent society. A calamitous, supercharged, and wildly enjoyable satire, Let the Games Begin will surprise, delight, and frighten.

Praise For Let the Games Begin…

"This book pulls off a rare feat: an action-packed but well-paced satire populated with characters rather than caricatures" Publishers Weekly

"Niccolò Ammaniti has constructed a novel you will not easily forget, rescuing the genius of Federico Fellini to mix chaos, social criticism and chronic human frailties . . . A fast-paced, fevered comedy . . . Ammaniti is the most gifted writer of his generation." El Mundo

"A bittersweet book where you laugh knowing that there really isn’t anything to laugh about." La Repubblica

Niccolo Ammaniti was born in Rome in 1966. He has written two collections of short stories and six novels, four of which have been translated into English. His second novel, "I'll Steal You Away," was long listed for The Independent Foreign Fiction Prize. He was the youngest ever winner of the Italian Viareggio Literary Prize for Fiction for his best-selling novel "I'm Not Scared," which has been translated into thirty-five languages. "As God Commands" received the prestigious Premio Strega Prize in 2007, and his novel "Me and You" was made into a feature film by Bernardo Bertolucci.

Kylee Doust [translator] studied Italian literature and linguistics at La Trobe University, Melbourne. She has lived in Italy since 1998.
Loading...
or
Not Currently Available for Direct Purchase