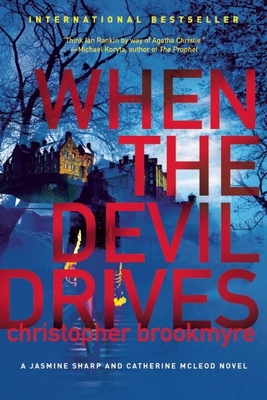 When the Devil Drives (Jasmine Sharp and Catherine McLeod Novels)

The second installment in Christopher Brookmyre's new crime series, When the Devil Drives is an intensely gripping literary thriller that delves into the darkest reaches of the human psyche. Actress turned private investigator Jasmine Sharp has become accustomed to clients looking for long-lost relatives, so when a woman hires her to find her younger sister Tessa Garrion, Jasmine presumes the case will be relatively straightforward. The assignment takes her back into the world of professional theater, where she is warned off more than once for probing too deeply into the past. Meanwhile, Detective Superintendent and mother-of-two Catherine McLeod is called to the scene of a murder in the Highlands. Following a theatrical outdoor performance of A Midsummer Night's Dream at Cragruthes Castle, a prominent figure in the Scottish arts community is shot dead during a post-performance photo call. With her initial leads turning out to be red herrings, McLeod struggles to determine the killer's motive. Jasmine soon uncovers Tessa's involvement in a drug-riddled Highlands estate retreat replete with occult rituals, which implicates more than a few people in the upper echelons of Scotland's arts scene. Tessa's disappearance in the summer of 1981 begins to look increasingly like murder, but the guilty will stop at nothing to keep the truth hidden. As Jasmine's and McLeod's investigations intertwine, it becomes evident that both cases are far more convoluted and dangerous than anticipated.

Christopher Brookmyre has established himself as one of Britain's leading crime novelists since his award-winning debut novel Quite Ugly One Morning. He has worked as a journalist for several British newspapers and is the author of twelve novels, including Where the Bodies Are Buried, One Fine Day in The Middle of the Night, and Not The End of The World.
Loading...
or
Not Currently Available for Direct Purchase