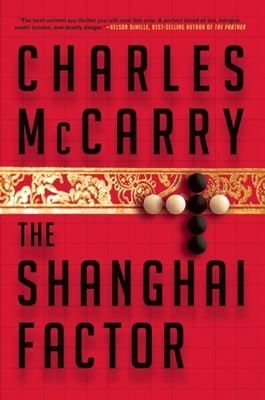 The Shanghai Factor unfolds with compelling speed, propelled by intriguing incidents, well-drawn characters and authentic-ringing spy world aphorisms." --The Wall Street Journal Following the hugely popular Paul Christopher series, The Shanghai Factor is the first standalone espionage novel from Charles McCarry, a CIA veteran and one of the best-loved American spy thriller writers. A young American spy is sent to Shanghai to absorb the culture and language for a shadowy U.S. agency known only as HQ. While there, he meets a sultry and mysterious woman named Mei, leading to a torrid love affair. Soon the enigmatic head of HQ gives the spy a task that forces him to risk everything: go undercover as the American representative for a massive Chinese conglomerate and learn the secrets of the powerful CEO, who HQ believes to be involved with the nearly uncrackable Chinese Intelligence Agency, Guoanbu. But the spy finds out that HQ isn't the only one tracking his every move--and that his tryst with Mei might have exposed more than just his heart. As the line between friend and foe blurs, the spy finds himself drawn into a deadly cat-and-mouse game between HQ and Guoanbu that might not only end his life, but upend the very balance of power between East and West.

Charles McCarry served under deep cover as a CIA operations officer in Europe, Asia, and Africa. He is the author of twelve previous critically acclaimed novels, as well as numerous works of nonfiction including Citizen Nader. He currently splits his time between Florida and the Berkshires.
Loading...
or support indie stores by buying on