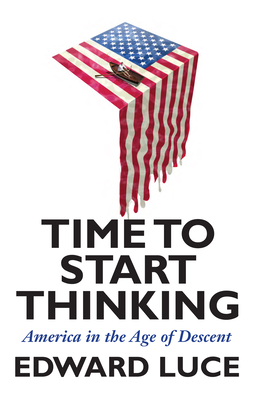 America in the Age of Descent

"Gentlemen, we have run out of money. It is time to start thinking."-Sir Ernest Rutherford, winner of the Nobel Prize in Nuclear Physics Time to Start Thinking is a book destined to spark debate among liberals and conservatives alike. Drawing on his decades of exceptional journalism and his connections within Washington and around the world, Luce advances a carefully constructed and controversial argument, backed up by interviews with many of the key players in politics and business, that America is losing its pragmatism - and that the consequences of this may soon leave the country high and dry. Luce turns his attention to a number of different key issues that are set to affect America's position in the world order: the changing structure of the US economy, the continued polarization of American politics; the debilitating effect of the "permanent election campaign"; the challenges involved in the overhaul of the country's public education system; and the health-or sickliness-of American innovation in technology and business. His conclusion, "An Exceptional Challenge" looks at America's dwindling options in a world where the pace is increasingly being set elsewhere.

Praise For Time to Start Thinking: America in the Age of Descent…

[Luce's] book could not be bettered as a compendium of American problems, at least as filtered through the center-left sensibilities of a pro-American European. . . . Time to Start Thinking raises the right questions at the right moment, which is what books are supposed to do. It deserves an audience in America. And I wouldn’t be surprised, too, if it ends up stacked on the best-seller tables in China.”Jonathan Rauch, The New York Times Book Review

Superb reporting of the on-ground reality of America’s current economic crisis . . . an unflinchingly brave book. Luce does not shy away from conclusions that are hard for many Americans to hear, not does he cop out and offer up the happy ending many in his audience may want to read. Rather, he offers what is most needed now: an objective profoundly thoughtful look at the underpinnings of America’s economic troubles, what makes the current crisis different from the past, and where we are likely headed from here.”Foreign Policy

Carefully balanced and often startlingly evocative analysis and reportage . . . It is true that there have been serious errors in policy. Luce, formerly the Financial Times’s south Asia bureau chief based in New Delhi and now the paper’s chief Washington correspondent, spells out these exercises in self-damage in painful and illuminating detail.”The Guardian

The book is not simply a laundry list of present-day policy failures (of which there have been many) but as hinted at by the title of a political system that’s stopped constructively engaging with policy challenges. . . . It’s time to start thinking.”Slate.com

Following a personalized and anecdotal narrative style, Edward Luce covers a wide canvas that describes the causes and possible solutions for the current state of the US economy. . . . Luce hooks from the first sentence . . . There will certainly be more books on the malaise, but this is a very engaging one.” Businessworld

In the vast library of literature about the United States, books by detached European observers fill only a few short shelves. . . . In some respects, Edward Luce’s Time to Start Thinking stands in the lineage of these illustrious forebears.”International Affairs

Luce wisely refrains from prescribing what America needs to do to get out of the rut. . . . They need new ideas, the lack of which Time to Start Thinking hopes to have captured. That in itself is no meager achievement.”Hindustan Times

Luce, despite his UK origins, has an insider’s knowledge of the US. He’s a long-time and well-connected Washington journalist and has also worked as a speechwriter for the US Treasury Department. But, as a foreigner, Luce is able to maintain some intrinsic distance from his subject (the US decline), which encourages a sober, data-driven analysis of America and its issues.”The Financialist (Book of the Week)

[Luce] puts forward a picture of a society that is poised delicately on the edge. America might not be facing complete collapse, à la Rome, but Luce’s narrative makes it clear that tremendous effortand plenty of luckwill be needed to reverse its current decay.”India Today

Every half-decade or so, Financial Times journalist Edward Luce delivers an easy-reading but insightful country profile. . . . Luce’s books profile nations at the tipping point. . . . Edward Luce is carrying forward the great tradition of foreign correspondents from the Anglo-Saxon world, going back at least to Edgar Snow, who have produced penetrating outsider accounts of nations in the throes of change.”Indian Express

Luce finds plenty of fresh thinking . . . Essential reading for anyone who cares about the fate of the US and its consequences for the rest of us.”Irish Times

Luce is a very good reporter. He has spoken to a terrific array of charactersincluding eccentric entrepreneurs, bankers, captains of old industries, new technology evangelists, senior politicians, an admiral, academics, a community college head, a recruitment agency boss, brilliant immigrant students who are going back” (i.e. away from the US). Best of all are his vivid portraits of Americans struggling to get by, assailed by what he calls the hollowing out” of America’s middle class.”Financial Times

Carefully balanced and often startlingly evocative analysis and reportage . . . illuminating . . . entertaining . . . Pundits who insist that American decline is not a fact but a choice are closing their minds to the real issue, which is how the US will adjust to a descent from primacy that cannot be stopped.”The Observer (UK)

Luce puts his finger right on some obvious and less obvious problems, all the time pointing the way out of the swamp. . . . Some of his observations are simply delightful. . . . This book needs to be read as a dose of cold water, but also as a goad to action to change its sad prognosis before it is too late. The waterfall is just ahead.”The Pittsburgh Post-Gazette

[Luce] reveals, from his extraordinary access to Pentagon officials, that even they admit the era of US global dominance is over.”The New Statesman

[A] lucid, reported tour d'horizon. It provides an excellent snapshot of America in 2010 and 2011, a country grappling with serious issues and unsure about its place in the world.”Yahoo.com

[A] thoughtful and gently polemical book on contemporary American society. . . an engaging read, filled with anecdotes, stories and character vignettes that make the main arguments easy to follow and interesting to read.”The Irish Examiner

In a tradition stretching back to de Tocqueville, sympathetic foreigners are often the keenest observers of American life. Edward Luce is one such person. He paints a highly disturbing picture of the state of American society, and of the total failure of American elites to come to grips with the real problems facing the country. It rises far above the current political rhetoric by its measured reliance on facts rather than canned ideological posturing to reach its conclusions.”Francis Fukuyama, author of The End of History and The Last Man

Time To Start Thinking is not only a wonderful tapestry of the current state of America, it provides a deeply insightful narrative on the origins of our current economic and political malaise. Ed Luce is a brilliant reporter who has spoken to everyone: CEOs and members of the cabinet, lobbyists and small town mayors, recent MBAs and unemployed teachers. In his acutely observed, often witty, and very humane portraits he succeeds converting the abstractions of economics and bringing them to life. This is a book that will transform the way you think of this country.”Liaquat Ahamed, Pulitzer Prize-Winning Author of The Lords of Finance

Americans need friends who will tell us what we need to hear and how to think about the troubles, many of our own making, that threaten our democracy, prosperity, and leadership in the world. We’ve got just such a friend in Ed Luce. He’s a foreign observer who has not just traveled widely in the United States but listened carefully to a wide array of our citizens. His concerns reflect what he has seen and heard from us, and he shares with his predecessor de Tocqueville a belief that America’s greatness lies in an ability to repair her faults.’ ”Strobe Talbott, president, The Brookings Institution

Warning: this book could be a danger to your peace of mind. One of the finest journalists of our time, Ed Luce has crisscrossed the United States, trying to understand what ails the country and what must be done. His conclusions are highly disturbingand may sometimes set your teeth on edgebut they are a must read.” Once again, a visitor to these shores has written a masterful portrait of America.”David Gergen, professor, Harvard Kennedy School; senior political analyst, CNN

[T]his sharply written analysis by Financial Times columnist Luce (In Spite of the Gods) presents a sobering account of the U.S. in decline. . . . Despite ample doom and gloom, Luce’s analysis is sound, and his data irrefutablerequired reading for pessimists and pious optimists alike.”Publishers Weekly, boxed review