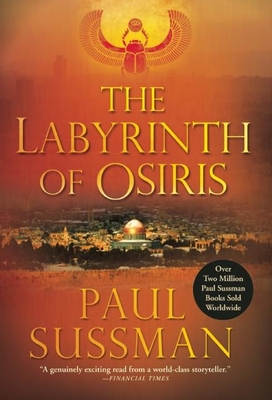 The Labyrinth of Osiris

Detective Arieh-Ben Roi of the Jerusalem police is tasked with the investigation into the death of a well-known Israeli journalist, Rivka Kleinberg, who is found brutally murdered in a cathedral in Jerusalem. Known for her fearless expos's, Kleinberg had made many high-powered enemies, including international corporations, the Israeli government, and the Russian Mafia. Looking for leads, Ben-Roi begins researching which stories Kleinberg was working on before she died, and finds a connection to Egypt which confuses him. At a stumbling block, Ben-Roi phones up his old friend, Yusuf Khalifa of the Luxor Police, and asks him if he will help him investigate the case. Khalifa is happy to help, and begins looking into another story that Kleinberg was researching just before her murder: the mysterious death of a British Egyptologist in the 1930s. This Egyptologist was said to have uncovered a giant labyrinth-like gold mine of incredible riches written about in the works of Herodotus. But what connection could this gold mine have with Kleinberg's murder? With a plot that moves from Israel to Egypt to Vancouver to Romania, The Labyrinth of Osiris is an intelligent, gripping novel from an internationally acclaimed master of thriller writing.

Paul Sussman (1966-2012) was a journalist, author and field archaeologist, whose first novel, The Lost Army of Cambyses, was an international best seller that was translated into twenty-eight languages. His books have sold over two million copies worldwide.
Loading...
or
Not Currently Available for Direct Purchase