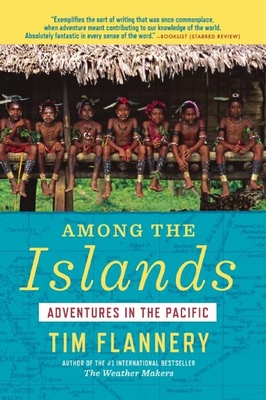 Adventures in the Pacific

Tim Flannery is one of the world's most influential scientists, credited with discovering more species than Darwin. In Among the Islands Flannery recounts a series of expeditions he made at the dawn of his career to the strange tropical islands of the South Pacific, a great arc stretching nearly 4,000 miles from the postcard perfection of Polynesia to some of the largest, highest, ancient, and most rugged islands on earth. Flannery was traveling in search of rare and undiscovered mammal species, but he found much more: wild, weird places where local taboos, foul weather, dense jungle, and sheer remoteness made for difficult and dramatic exploration. Among the Islands is full of fascinating creatures--monkey faced bats, giant rats, gazelle-faced black wallabies, and more--and the adventure of discovery. This is an idea read for anyone who has ever imagined voyaging to the ends of the earth to uncover and study the rare and the wonderful.

Tim Flannery is a scientist, explorer and conservationist. He has published more than 130 peer-reviewed scientific papers and many books including The Future Eaters and the international bestseller The Weather Makers, which has been translated into more than 20 languages. He was named Australian of the Year in 2007.http: //www.timflannery.com.au
Loading...
or
Not Currently Available for Direct Purchase