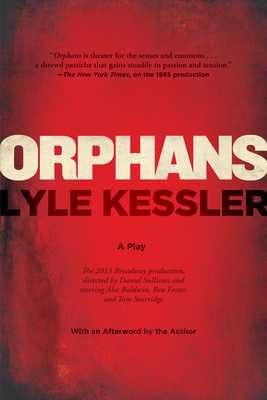 Now a Broadway production directed by Daniel Sullivan and starring Alec Baldwin, Ben Foster, and Tom Sturridge "I have dreamed, for a long time, of doing this play with this director."--Alec Baldwin In a run-down house in North Philadelphia live two orphan brothers: the reclusive, sensitive Philip, sealed off in a world of StarKist tuna and Errol Flynn movies, and Treat, a violent pickpocket and thief. Into this ferocious and funny world enters Harold, a mysterious, wealthy, middle-aged man who is kidnapped by Treat, but who soon turns the tables on the two brothers, changing forever the delicate power balance of their relationship. Both hilarious and heartbreaking, Orphans is a story of the universal love of a father for his son, and a son's need to live his own life. Orphans is an international theatrical phenomenon, and has been produced in almost every country in the world. It premiered in 1983 at the Matrix Theatre in Los Angeles, was subsequently produced by Chicago's Steppenwolf Theatre Company, off-Broadway at the Westside Arts Theatre and in London, and was adapted for film, starring Albert Finney as Harold. The 2013 production marks the play's first Broadway presentation.

Lyle Kessler's most recent play "Collision" opened Off Broadway at the Rattlestick Theater in January 2013. His other plays include "The Watering Place," "Possession," "Robbers" and "Unlisted." His new play "The Great Divide" is being developed by the Labyrinth Theater Company. His films include "Orphans," "Gladiator," "The Saint of Fort Washington" and "Touched," in which he co-starred. Kessler served as the Director of the Sundance Screenwriter's Lab and now lives in New York with his wife, actress Margaret Ladd.
Loading...
or support indie stores by buying on