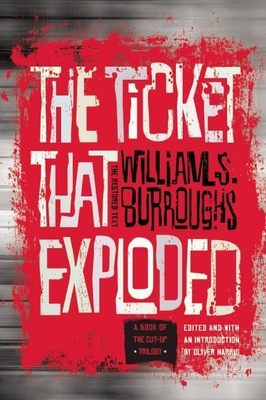 The Ticket That Exploded

As this new edition reveals, the cultural reach of The Ticket That Exploded has expanded with the viral logic of Burroughs's multimedia methods, recycling itself into our digital environment. A last chance antidote to the virus of lies spread by the ad men and con men of the Nova Mob, Burroughs's book is an outrageous hybrid of pulp science fiction, obscene experimental poetry, and manifesto for revolution--as fresh today as it ever has been. Edited from the original manuscripts by renowned Burroughs scholar Oliver Harris, this revised edition incorporates an introduction and appendices of never before seen materials.

Praise For The Ticket That Exploded: The Restored Text…

In Mr. Burroughs’s hands writing reverts to acts of magic, as though he were making some enormous infernal encyclopedia of all the black impulses and acts that, once made, would shut away the fiends forever.”The New York Times

It is in books like The Ticket that Exploded that Burroughs seems to revel in a new medium for its own sakea medium totally fantastic, spaceless, timeless, in which the normal sentence is fractured, the cosmic tries to push its way through bawdry, and the author shakes the reader as a dog shakes a rat.”Anthony Burgess, author of A Clockwork Orange

The power of his imagination often carries his comedy far into the buried recesses of the psyche.”The New Republic

William S. Burroughs (1914-1997) was the author of numerous novels, including "Junky," "Queer""Naked Lunch," "Nova Express," "The Ticket That Exploded," "The Soft Machine," and "The Wild Boys." He is considered one of the twentieth century's most radical, innovative, and influential writers, and a founding member of the Beat Generation.
Loading...
or support indie stores by buying on