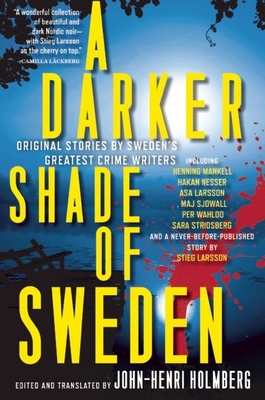 Ever since Stieg Larsson shone a light on the brilliance of Swedish crime writing with his acclaimed and bestselling Girl With the Dragon Tattoo trilogy, readers around the world have devoured fiction by some of the greatest masters of the genre. In this landmark and unique publication, Sweden's most distinguished and best-loved crime writers have contributed stories to an anthology that promises to sate the desire to read about the dark side of Sweden. Containing seventeen stories, never before published in English, A Darker Shade of Sweden illuminates this beguiling country and its inhabitants as never before. Included are stories from such Swedish literary luminaries as: - Stieg Larsson
- Henning Mankell
- sa Larsson
- Eva Gabrielsson

"A wonderful collection of beautiful Nordic noirwith Stieg Larsson as the cherry on top."Camilla Lackberg

John-Henri Holmberg is the Edgar-nominated co-author of the 2011 book "Secrets of the Tattooed Girl," about the Millennium novels and their author, Stieg Larsson, who was a personal friend. After taking a degree in literature and philosophy at the universities in Uppsala and Stockholm, he has worked as a writer, translator, anthologist, and magazine and book editor and as a publisher. He has written books on science fiction, psychological thrillers, adult fantasy fiction and movies, and lectured on popular fiction, particularly crime and science fiction. For more than fifteen years he reviewed crime fiction for southern Sweden's largest daily newspaper, which gained him the Jan Broberg Excellence in Criticism award as well as election to the Swedish Crime Fiction Academy. He is also an expert contributor on literature to both the "Swedish National Encyclopedia" and to the international on-line Encyclopedia of Science Fiction. The Swedish quarterly "Nova Science Fiction," which he edited and published, won the 2009 Eurocon Award as best professional sf magazine in Europe. He is now a full-time writer, translator and editor, living with his family on the southern coast of Sweden.
Loading...
or
Not Currently Available for Direct Purchase