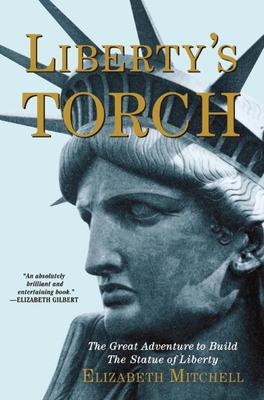 The Great Adventure to Build the Statue of Liberty

The Statue of Liberty is one of the most recognizable monuments in the world, a powerful symbol of freedom and the American dream. For decades, the myth has persisted that the statue was a grand gift from France, but now Liberty's Torch reveals how she was in fact the pet project of one quixotic and visionary French sculptor, Fr d ric Auguste Bartholdi. Bartholdi not only forged this 151-foot-tall colossus in a workshop in Paris and transported her across the ocean, but battled to raise money for the statue and make her a reality. A young sculptor inspired by a trip to Egypt where he saw the pyramids and Sphinx, he traveled to America, carrying with him the idea of a colossal statue of a woman. There he enlisted the help of notable people of the age - including Ulysses S. Grant, Joseph Pulitzer, Victor Hugo, Gustave Eiffel, and Thomas Edison - to help his scheme. He also came up with inventive ideas to raise money, including exhibiting the torch at the Phildaelphia world's fair and charging people to climb up inside. While the French and American governments dithered, Bartholdi made the statue a reality by his own entrepreneurship, vision, and determination.

Elizabeth Mitchell is an editor, journalist, and author. She is the author of two nonfiction books: "Three Strides Before the Wire: The Dark and Beautiful World of Horse Racing," and "W: Revenge of the Bush Dynasty."
Loading...
or
Not Currently Available for Direct Purchase