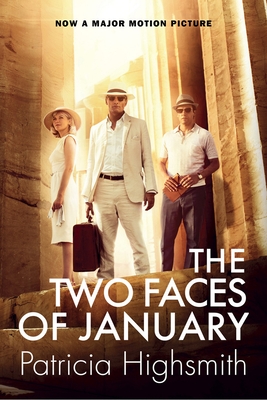 The Two Faces of January (Paperback)

" A] classic psychological thriller."--USA Today Originally published in 1964, and the winner of the CWA Best Foreign Novel Award, Patricia Highsmith's The Two Faces of January is a chilling tale of suspense, suffused with her trademark slow, creeping unease. In a grubby Athens hotel, Rydal Keener is bored and killing time with petty scams. But when he runs into another American, Chester MacFarland, dragging a man's body down the hotel hall, Rydan impulsively agrees to help, perhaps because Chester looks like his father. Then Rydal meets Collete, Chester's younger wife, and captivated, becomes entangled in their sordid lives, as the drama marches to a shocking climax at the ruins of the labyrinth at Knossos. A film version of The Two Faces of January, starring Viggo Mortensen, Kirsten Dunst, and Oscar Isaac (Drive, Inside Llewelyn Davis) is in production. Adapted by Academy Award nominee Hossein Amini (Drive), and produced by Working Title and Timnick Films (The Talented Mr. Ripley), it will be released later this fall. "An offbeat, provocative and absorbing suspense novel."--The New York Times "Patricia Highsmith is one of the few suspense writers whose work transcends genre."--The Austin American-Statesman

Praise For The Two Faces of January…

"[Highsmith's] characters are irrational, and they leap to life in their very lack of reason. . . . Highsmith is the poet of apprehension rather than fear."Graham Greene

"For some obscure reason, one of our greatest modernist writers, Patricia Highsmith, has been thought of in her own land as a writer of thrillers. She is both. She is certainly one of the most interesting writers of this dismal century."Gore Vidal

"Miss Highsmith's genius is in presenting fantasy's paradox: successes are not what they seem. . . . Where in the traditional fairy tale the heroine turns the toad into a prince, in Miss Highsmith's fables the prince becomes a toadsuccess is nearly always fatal. . . . Combining the best features of the suspense genre with the best of existential fictiona reflectionthe stories are fabulous, in all the senses of that word."Paul Theroux

"Patricia Highsmith's novels are peerlessly disturbingbad dreams that keep us restless and thrashing for the rest of the night."Terrence Rafferty, New Yorker

"Highsmith, who can change reality to nightmare with one well-turned phrase, is a legendary crime writer."Cleveland Plain Dealer