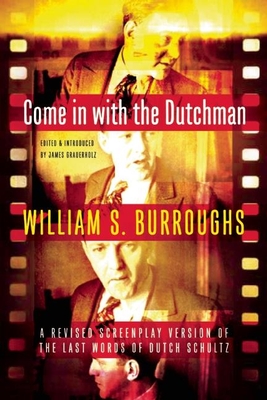 Come in with the Dutchman

A Revised Screenplay Version of the Last Words of Dutch Schultz

"This is Burroughs's most accessible, tightly knit work of fiction. . . . Laid out as a stripped-down movie script it's almost as if this is the form that Burroughs has always needed."--Kirkus Reviews Before he was gunned down in the Palace Chop House in Newark, New Jersey, in October 1935, Arthur Flegenheimer, alias Dutch Schultz, was generally considered New York's number one racketeer. Taken to a hospital following the gangland shooting, Schultz survived for two days. His room was guarded around the clock, and a police stenographer was stationed at his bedside in the hope of learning who is assailant or assailants were. Instead, what was recorded were Dutch's fevered fantasies, stemming from his childhood and youth, as well as his recent past. Taking these "last words" as a starting point, Burroughs has created in this work a fantasia on Dutch Schultz, a narrative that takes the form of a film script and explores themes including crime, addiction, and power.

William S. Burroughs (1914-1997) was a founding member of the Beat Generation in the mid 1940s. His best-known works include Junky, Queer, Naked Lunch, and the trilogy of cut-up novels, The Soft Machine, The Ticket That Exploded, and Nova Express. James Grauerholz was William S. Burroughs's longtime secretary and editor.
Loading...
or support indie stores by buying on
(This book is on backorder)