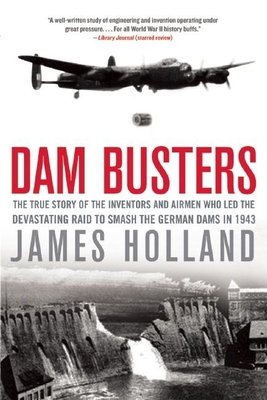 The night of May 16, 1943. Nineteen specially adapted Lancaster bombers take off from an RAF airfield in Lincolnshire, England, each with a huge nine-thousand-pound cylindrical bomb strapped underneath it. Their mission: to head deep into the German heartland and destroy three hydroelectric dams that power the Third Reich's war machine. From the outset it was an almost impossible task, a suicide mission. First the men had to fly extremely low, at night, and in tight formation over miles of enemy-occupied territory. Then, just sixty feet above the water and at some of the most heavily defended targets in Germany, they had to drop with pinpoint precision a complicated spinning cylindrical bomb that had never before been used operationally. More than that, the entire operation had to be put together in less than ten weeks, while the water levels in the dams were still high enough for the bombs to be effective. When the visionary aviation engineer Barnes Wallis's concept of the bouncing bomb was green-lighted, he hadn't even drawn up the plans for the weapon that was to smash the dams. What followed was an incredible race against time that, despite numerous setbacks and against huge odds, became one of the most successful and game-changing bombing raids of all time. James Holland's Dam Busters is meticulously researched and brilliantly told, sure to be the definitive history of this incredible raid.

James Holland was born in Salisbury, Wiltshire, and studied history at Durham University. A member of the British Commission for Military History and the Guild of Battlefield Guides, he also regularly contributes reviews and articles in newspapers and magazines and appears on radio. His books include Fortress Malta, Italy's Sorrow, The Battle of Britain and his fictional World War II series featuring Sergeant Jack Tanner. He lives near Salisbury with his wife, son and daughter.
Loading...
or support indie stores by buying on