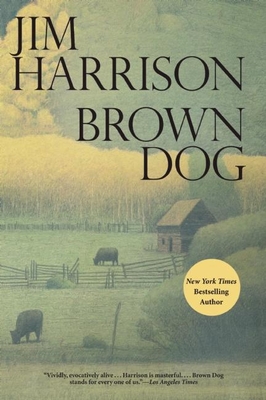 "What Harrison does on every page of Brown Dog is have fun . . . not simply for the sake of delight but because he believes delight is as close to sublimity as humans can get. . . . The great project of life, he reminds us, is to sit still long enough to appreciate it." --Anthony Doerr, The New York Times Book Review "Brown Dog is . . . an everyman on the most fundamental level . . . vividly, evocatively, alive. . . . These novellas read like a nuanced conversation between author and character. . . . Masterful." --David Ulin, Los Angeles Times New York Times best-selling author Jim Harrison is one of America's most beloved writers. Of all his creations, Brown Dog has earned cult status with readers in the more than two decades since his first appearance, scrambling to stay out of jail after his salvage-diving operation uncovers the frozen body of an Indian man in the waters of Lake Superior. A Publishers Weekly Best Book of the Year, now in paperback, this book gathers together all the Brown Dog novellas, including one that has never been published. Brown Dog is a bawdy, reckless, down-on-his-luck Michigan Indian, a former pulp cutter who looks on work as something to do when he needs money, far inferior to the pleasures of fishing. Of course, the flip side of this is that he's never far from catastrophe. Overindulging in food, drink, and women while just scraping by, B.D. meets a nubile archaeologist who presses him for the location of a sacred Native American burial ground; the ensuing flirtation with radicalization results in B.D. wandering Los Angeles in search of a stolen bearskin. When he returns home a little older and wiser, B.D. will seek out family and end up pining for the lesbian social worker who's pushing him toward stability. The collection culminates with "He Dog," written for this book, which finds B.D. still marginally employed and looking for love (or sometimes just a few beers and a roll in the hay) as he goes on a road trip from Michigan to Montana and back, in search of an answer to the riddle of family and, perhaps, a chance at redemption. Witty and poignantly human, Brown Dog underscores Harrison's place as one of America's most irrepressible writers, and one of our finest practitioners of the novella form. It is the ideal introduction (or reintroduction) to Harrison's irresistible everyman.

Jim Harrison is the author of thirty-five previous books of poetry, nonfiction, and fiction, including Legends of the Fall, The Road Home, Returning to Earth, and The English Major. A member of the American Academy of Arts and Letters and winner of a Guggenheim Fellowship, he has had work published in twenty-seven languages. Harrison lives in Montana and Arizona.
Loading...
or support indie stores by buying on