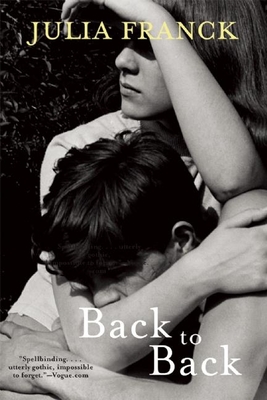 Back to Back (Paperback)

Julia Franck's German-Book-Prize-winning novel, The Blindness of the Heart, was an international phenomenon, selling 850,000 copies in Germany alone and being published in thirty-five countries. Her newest work, Back to Back echoes the themes of The Blindness of the Heart, telling a moving personal story set against the tragedies of twentieth-century Germany. Back to Back begins in 1954, and centers around a single family living in Berlin in the socialist East. The mother, K the, is a sculptor of Jewish heritage, who has been leveraging her party connections in order to get more important and significant commissions. Devoted entirely to becoming a success in the socialist state, she is a cruel and completely unaffectionate mother, putting the party above her children, who she treats as if they were adults - there is no bourgeois mollycoddling in her household. Thomas and Ella's father emigrated to West Germany after World War II, and they deeply long to see him again and dream of a life where they could be allowed to have the kind of childhood that other children enjoy. But K the's hard-nosed brutality - a reflection of the materialistic, unsentimental state in which she lives - means Thomas and Ella are unable to live the lives they want to - instead of his dream of becoming a writer, Thomas is forced to study geology, and do hard labor at a quarry as the practical part of his education. And Ella, meanwhile, is becoming increasingly introverted and strange - not least because the Stasi lodger the government has billetted in their home is beginning to abuse her... Heartbreaking and shocking, Back to Back is a dark fairytale of East Germany, the story of a single family tragedy that reflects the greater tragedies of totalitarianism.

Julia Franck was born in Berlin in 1970. Her novel The Blindness of the Heart, won the German Book Prize and sold over 800,000 copies in Germany alone. It was shortlisted for the Independent Foreign Fiction Prize and the Jewish Quarterly-Wingate Literary Prize, and was named one of the best books of the year by Kirkus Reviews and the Guardian. Back to Back is her second novel to be translated into English. She lives in Berlin.
or
Not Currently Available for Direct Purchase
Copyright © 2020 American Booksellers Association