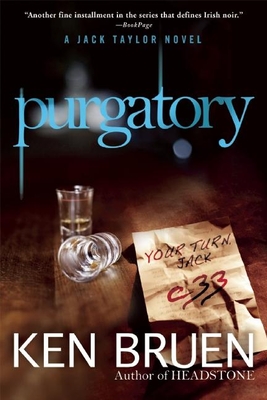 Jack Taylor has finally found a modicum of peace. He has managed to kick, however tenuously, the substances that had a stranglehold over his life. Yet this fragile existence is threatened when a vigilante killer begins targeting citizens, signing mysterious notes with the moniker "C33" and addressing them to Jack. As Jack tries to unravel the mystery of this demented murderer, he is brought into the fold of an enigmatic tech billionaire who has been buying up massive amounts of property in Galway, seemingly in the hopes of offering this downtrodden city a better future. But if Jack has learned one thing, it's that people who outwardly claim to be on the side of righteousness are likely harboring more nefarious motives. With the help of a former-drug-dealer-turned-zen-master and a dogged police sergeant, Jack is determined to track down "C33," even if it jeopardizes his friends, his sobriety, and the last remaining shreds of his sanity.

Ken Bruen received a doctorate in metaphysics; taught English in Africa, Japan, Southeast Asia, and South America; and then became a crime novelist. His novels, including nine previous Jack Taylor books, have been nominated for many awards, including two Edgar Awards.
Loading...
or support indie stores by buying on