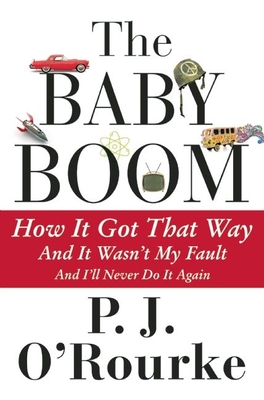 P.J. O'Rourke began writing funny things in 1960s "underground" newspapers, became editor-in-chief of National Lampoon, then spent 20 years reporting for Rolling Stone and The Atlantic Monthly as the world's only trouble spot humorist, going to wars, riots, rebellions, and other "Holidays in Hell" in more than 40 countries.
Now O'Rourke, born at the peak of the Baby Boom, turns his keen eye on himself and his 75 million accomplices in making America what it is today. With laughter as an analytical tool, he uses his own very average, if sometimes uproarious experiences as a key to his exceptional age cohort. He writes about the way the post-war generation somehow came of age by never quite growing up and created a better society by turning society upside down.
THE BABY BOOM: How it Got That Way... And It Wasn't My Fault... And I'll Never Do It Again is at once a social history, a group memoir of collectively impaired memory, a hilarious attempt to understand his generation's messy hilarity, and a celebration of the mess the Baby Boom has made.