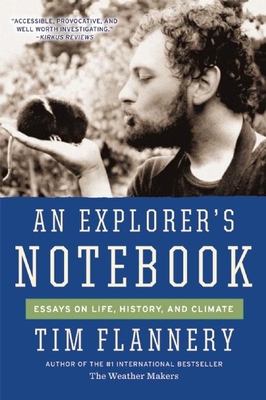 Essays on Life, History, and Climate

Best known for his #1 international bestseller The Weather Makers, Tim Flannery is one of the world's most influential scientists, a foremost expert on climate change credited with discovering more species than Charles Darwin. But Flannery didn't come to his knowledge overnight. With its selection of exhilarating essays and articles written over the past thirty years, An Explorer's Notebook charts the evolution of a young scientist doing fieldwork in remote locations into the major thinker who has changed the way we think about global warming. In these thirty pieces, Flannery writes about his journeys in the jungles of New Guinea and Indonesia, about the extraordinary people he met and the species he discovered. He writes about matters as wide-ranging as love, insects, population, water, and the stresses we put on the environment. He shows us how we can better predict our future by understanding the profound history of life on Earth. And he chronicles the seismic shift in the world's attitude toward climate change. An Explorer's Notebook is classic Flannery--wide-ranging, eye-opening science, conveyed with richly detailed storytelling.

Tim Flannery is a scientist, explorer, and conservationist. He has published more than 130 peer-reviewed scientific papers and many books including the international bestseller The Weather Makers>o?, which has been translated into more than 20 languages, Throwim' Way Leg, Here on Earth, and Among the Islands. He was named Australian of the Year in 2007, and from 2011 to 2013 he was head of the Australian Climate Change Commission.
Loading...
or
Not Currently Available for Direct Purchase