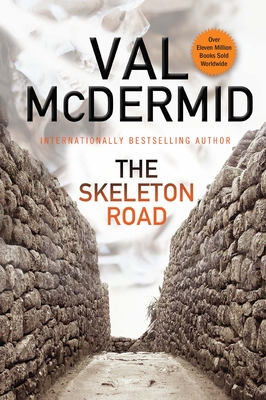 Internationally best-selling crime writer Val McDermid is one of the most dependable professionals in the mystery and thriller business, whose acutely suspenseful, seamlessly plotted novels have riveted millions of readers worldwide. In The Skeleton Road, she delivers a gripping standalone novel about a cold case that links back to the Balkan Wars of the 1990s. In the center of historic Edinburgh, builders are preparing to demolish a disused Victorian Gothic building. They are understandably surprised to find skeletal remains hidden in a high pinnacle that hasn't been touched by maintenance for years. Who do the bones belong to, and how did they get there? Could the eccentric British pastime of free climbing the outside of buildings play a role? Enter cold case detective Karen Pirie, who gets to work trying to establish the corpse's identity. And when it turns out the bones may be from as far away as former Yugoslavia, Karen will need to dig deeper than she ever imagined into the tragic history of the Balkans: to war crimes and their consequences, and ultimately to the notion of what justice is and who serves it. The Skeleton Road is an edge-of-your-seat, unforgettable read from one of our finest crime writers.

Val McDermid is the best-selling author of twenty-eight previous novels, which have been translated into over forty languages and have sold over ten million copies worldwide.
Loading...
or
Not Currently Available for Direct Purchase